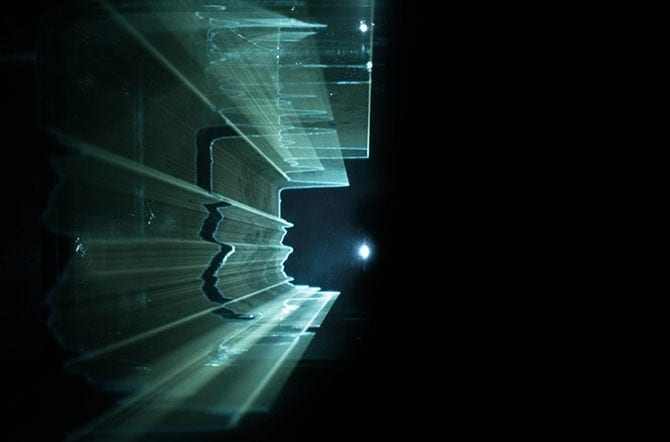 A hanging glass case is filled with smoke and it is crossed by a video projector’s beams of light.  The sound variations become light and the rays, meeting and crossing the fog, gain a concrete and physical three-dimensionality. This Messier’s device allows us to three-dimensionally visualize the sound through the interaction among primary natural elements.

Martin Messier is music composer, performer and videomaker. The sound is the centre of his research but he is also really interested in the contamination among various different forms of expression. His work takes up its form through the relation between sound and concrete materials (objects and bodies). It always tries to redefine the concept of concrete music by creating sounds with every-day-life objects, such as alarm clocks, pens, self-conceived machines and sewing machines- reinventing their function. Martin Messier work has been presented in many national festival and events, such as Mutek, FTA and Mois Multi, as well as in international ones, such as Berlin’s Transmediale, Sónar in Barcelona, Nemo in Paris,  Scopitone in  Nantes and Today’s Art in The Hague. “ La chambre des machines” also received a distinction at the prestigious Ars Electronica.