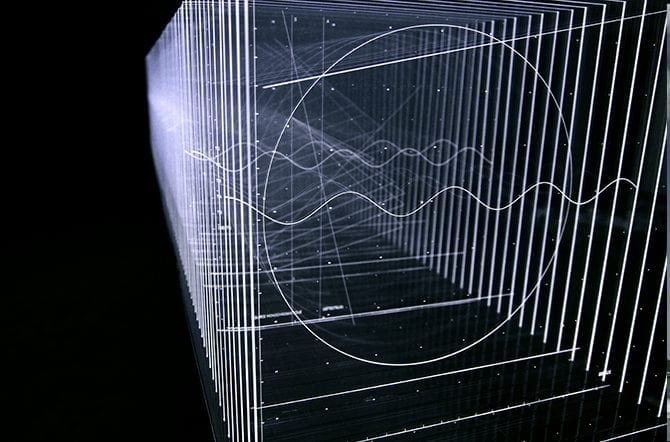 “FREQUENCIES (LIGHT QUANTA)” is an audiovisual installation concerning with the energy’s smallest measurable value: the Quantum. The entire project is based on the metaphorical relations among the fundamental principles of the Quantum Physics applied to the processes of the audiovisual creation: particles, waves, probabilities, duality and discontinuity. Moving from the investigation about these physical concepts, the audiovisual installation develops into the space through a sequence of 100 clear acrylic sheets that, struck by a beam of light, reveal their “information”. A rhythmic sound and light sequence expand in time and space.

Nicolas Bernier creates sound performances, installations, concrete music, live electronic music, post-rock, improvisations, noise and video art, also working with dance, theatre, moving images and inter-disciplinary contexts. Notwithstanding his eclecticism, his artistic investigations are always in constant balance between the cerebral and the sensual, the organic and the digital sources. Winner of the prestigious Prix Ars Electronica Golden Nica in 2013, his work has also been exhibited at Sónar (Spain), Mutek (Canada), DotMov Festival (Japan) and Transmediale (Germany) and recoded by labels as Crónica (Portugal), Linea (US), Leerraum (Switzerland) and Entr’acte (UK).