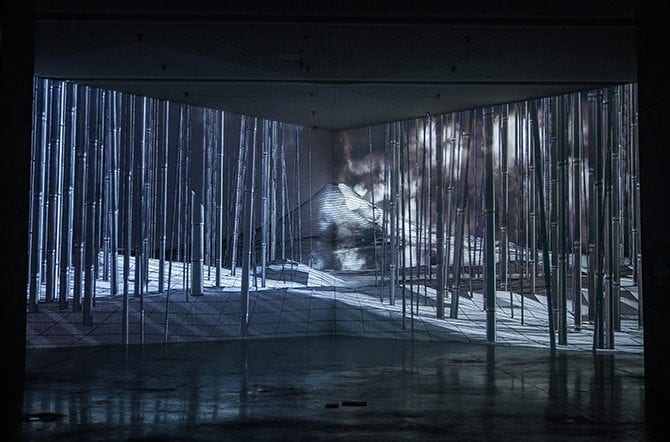 “Fuji” is a part of a series of Lemercier’s works about the volcanos. The project developed during the artist’s stay in Takamatsu, in Japan. Some images are projected on a large freehand drawing representing the Fujiyama. A multisensorial immersive place where an imaginary and poetical vision, inspired by the Kaguya Hime -a  X Century fairy tale, key element of the Japanese culture- takes its form up.  The artist draws directly on the walls of the museum the Aokigahara Forest at the foot of Mount Fujiyama, whose peak is visible in the distance. Paul Jebanasam wrote the music. Overlapping classical music and sound records he creates an epic and strongly emotional sound “landscape”.

Joanie Lemercier is a French artist who focuses his work on the projection of the light into the space. His mother taught woven pattern design and so he has been creating work of art through the use of the computer since he was 5.  In 2008 he co-founds the AntiVJ group, together with Yannick Jacquet, Romain Tardy and Olivier Ratsi. In 2013 he founds a creative lab in New York. He is represented by Muriel Guepin Gallery of New York.