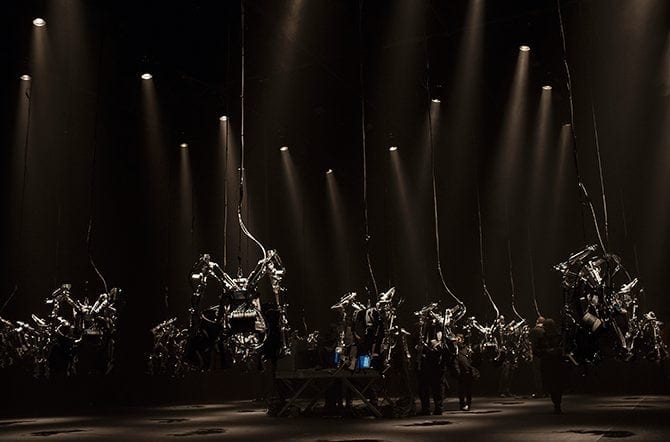 “Inferno” is a robotic installation, inspired by the homonymous performance in which the artist reinterprets    the Dantesque conception of the “infernal circles” and makes a reflection about the idea of punishment. Into the performance the visitors can wear some robotic exoskeletons that force them to make movements. A programmed choreography. The public is not anymore the final goal of the work of art purpose but he is its mean. Into the installation the exoskeletons –actual autonomous entities- mysteriously struggle into the darkness. The result is an immersive and multisensorial place inhabited by the robots.

Bill Vorn lives and works in Montréal and he has been working with Robotic art for more than 20 years. His projects involve robotics, motion control, sounds, lights and cybernetic processes. He is teacher of Electronic Arts in the Department of Studio Arts at Concordia University. His work has been presented in multiple international events.