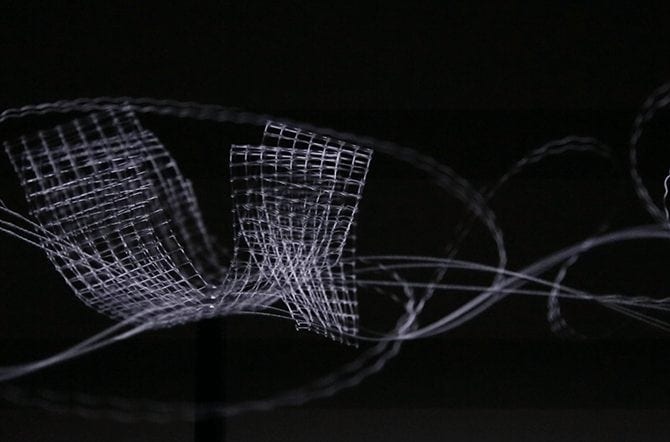 In “temporAir”, Maxime Damecour creates an incisive and amazing imitation of the visual effect of the so called “jump cut”, a type of cinematographic cutting. The work is made of a metal-net strip laying on some supports directly connected to sound amplifiers and bands of LED lights. The strip, stimulated by the acustic vibrations, slightly changes its position. The strobe lights divide the “scenes” into consequential frames and let us to perceive the presence of the metal strip and, like into a cinematographic cutting, remove the perception of the physical movement. This subtle, but really powerful technique concerns with the effect of  imagination and film language over the human perception.

Maxime Damecour was born in Quebec. He is a multidisciplinary artist, co-founder of CoLab and very passionate about technological bricolage. He studied Cyber Arts at the Concordia University and he is a promotor of  the “open source” technology.