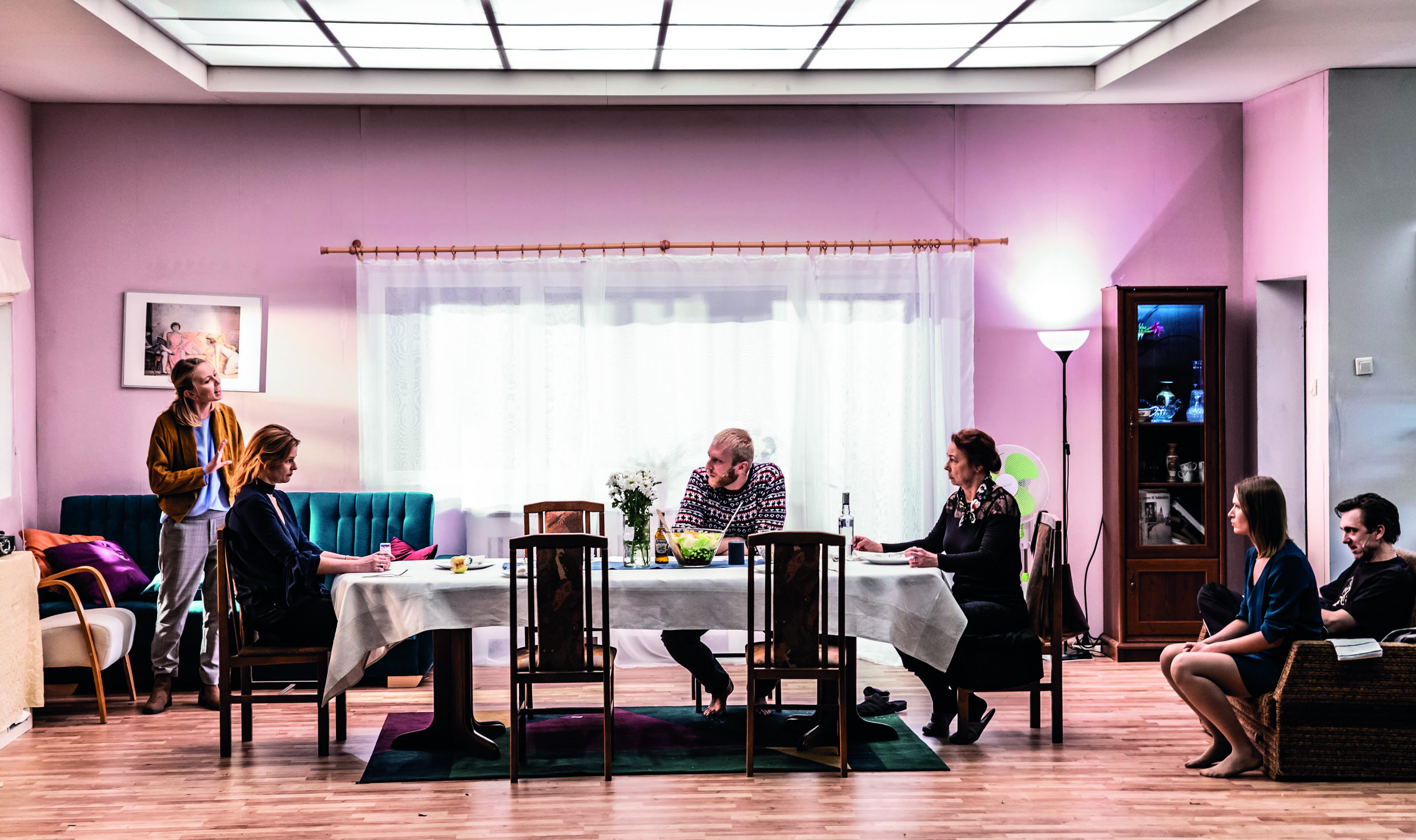 Pieces of a Woman

Written by Kata Wéber and directed by Kornél Mundruczó, Pieces of a Woman was recently acclaimed internationally in its film version. The cinematic language, the close-ups, the realism of the details were, however, already part of the show created well before the film for TR Warszawa (among the most important European permanent companies) and repeatedly awarded with prestigious prizes (such as the Swarowski Award, the most important prize dedicated to theater directors in Poland).

For the first time in Italy, the show brings to the stage the story of Maja, in her thirties, struggling with the consequences of a personal tragedy and with the pressure exerted on her by family and social expectations related to her identity. We watch her in her home life, in Warsaw, during a family reunion that seems to enlarge, under a magnifying lens, the conflicts and contradictions of a whole society. This is where the sharp pen of Wéber and the gaze of Munduczó weave with delicacy and empathy, a family drama in which the centrality of the female roles becomes a metaphor for the emancipation journey of all women.

Kornél Mundruczó: a Hungarian theatre and film director, actor; he studied film-making at the Hungarian Film Institute. Between 1998 and 2016 he has made 16 short and feature films. He was awarded the Silver Leopard in Locarno for his Pleasant Days (2002), FIPRESCI- Preis in Cannes for Delta (2008) and was nominated to Golden Palm awards for tenDer son. the Frankenstein Project. A er freelancing with more or less the same group of people for several years, in 2009 he founded his independent theatre company, Proton Theatre together with Dora Buki. His most famous productions include the stage adaptation of W. Sorokin’s ice, J. M. Coetzee’s Disgrace, harD to be a goD, based on his own script and the imitation oF liFe, based on the text by Kata We?ber. In 2013, he received the “Guarantee of Culture” award for the bat or my little cemetery directed at TR Warszawa. He stages his theatre adaptations in Hungarian, German (Thalia Theater) and Austrian theatres (Wiener Festwochen). The production of White goD, another of his full-length films, won the Prize “UN CERTAIN REGARD” at the 2014 Cannes Film Festival and was screened in the Spotlight section of Sundance Film Festival in 2015. His
2017 3rd film juPiter’s moon was as well in the official selection for the Cannes Film Festival.

Kata Wéber: an actress and a screen writer, known for Pleasent Days (2002), a a (2001) and transmission (2009). She is a co-author of the script of the award winning feature films White goD and juPiter’s moon and theatre scripts: the bat (TR Warszawa, 2012) and the imitation oF liFe (Proton Theatre, 2016).

TR Warszawa: In 1998, a year after his critically acclaimed debut with the troPical craze, Grzegorz Jarzyna was offered the direction of a small Warsaw stage called Teatr Rozmaitosci. Since that time, he has transformed it into TR Warszawa, one of the most important theaters in Poland – and one of the best known Polish theaters around the world. TR Warszawa is home to artistic experiments of all kinds. Jarzyna has created a place that not only provides space for his own work, but also attracts other brilliant directors such as Krystian Lupa, Krzysztof Warlikowski, Jan Klata, Rene Pollesch, and Kornel Mundruczo. He has built an an acclaimed team of actors, composers, and designers. Always on the lookout for new talents and a new language for contemporary theater, TR Warszawa has commissioned several new dramas, made some bold reinterpretations of classics texts, opened its stage to young actors and directors, and explored the potential of non-traditional performance spaces in the city. Among the theater’s latest productions are Grzegorz Jarzyna’s martyrs based on text by Marius von Mayenburg, ivona, Princess oF burgunDia coproduced with Theatre of Nations in Moscow, g.e.n, a story about an alternative community, tWo sWorDs based on Forging the sWorDs by Lu Xun and renewal of no matter hoW harD We trieD adapted from Dorota Masowska’s acclaimed drama. In its current repertoire there are also productions of young directors such as Jedrzej Piaskowki’s PuPPenhaus. treatment and the Fantasia directed by Anna Karasinksa as well as productions of directors who have already gained their status of such as Micha Borczuch’s my struggle based on Karl ove Knausgard’s books or caliFornia / grace slick written and directed by Rene Pollesch. TR Warszawa receives invitations to various festivals and stages in Europe and beyond, and has performed among others in Avignon, Paris, Lille, London, Edinburgh, Moscow, St. Petersburg, Jerusalem, Berlin, Istanbul, Munich, vienna, Stockholm, Dublin, Brussels, Madrid, Minsk, Bucharest, Toronto, New york, Los Angeles, Wellington, Hong Kong, Beijing, Tianjin and Harbin. At the very end of 2016/2017 artistic season at TR Warszawa the audience was treated to the marvellous performance of macbeth by Tang Shu-wing Theatre Studio, directed by Tang-Shu-wing, which took place at TR Warszawa on June 28-29, 2017. In January 2018, Grzegorz Jarzyna made his first premiere in China – produced by TR Warszawa, Beijing Propel Performing Arts & Media Co., Ltd. And Shanghai Theater Academy with the production of tWo sWorDs by Lu Xun’s Story. The world premiere of tWo sWorDs took place in Beijing, the show was also presented in Shanghai and Harbin. In February 2018 in yokohama, Japan, the premiere of the recording of his performance g.e.n in video technology 360 degrees / vR took place. g.e.n vr is the world’s first registration of a theater performance in vR technology, made live with the audience.