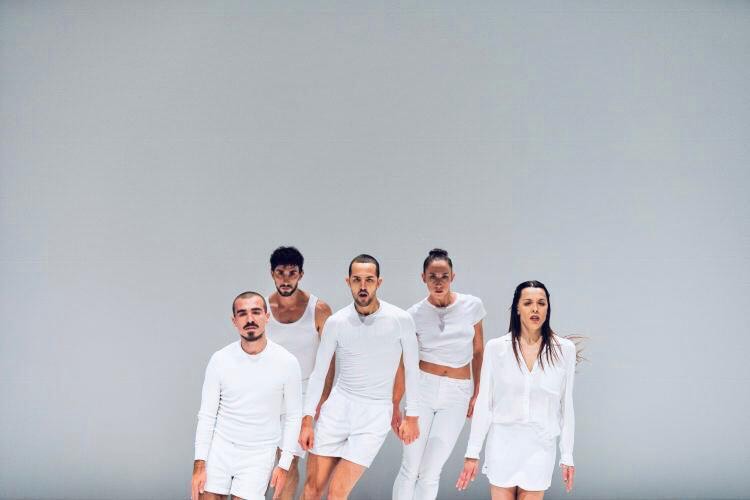 The winning project of the DNAppunti Coreografici 2019 edition, Esercizi per un manifesto poetico marks the stage debut of the MINE collective, formed by Francesco Saverio Cavaliere, Fabio Novembrini, Siro Guglielmi, Roberta Racis and Silvia Sisto. With this foundational act MINE collectively constitutes a poetic / choreographic manifesto, a hymn to the human and artistic encounter, to shared authorship and to the poetics of the body. Through all of this, the collective investigates its relationship with aesthetics, choreography, language, rules and rebellion.

Francesco Saverio Cavaliere – He is an Italian freelance dancer based in Rome. He graduated from the National Dance Academy in 2012. During his studies he worked with different choreographers such as Adriana Boriello, Ismael Ivo, Wayne McGregor, Dino Verga, Michele di Stefano, and Ricky Bonavita. Before graduating, he worked as a soloist with the Vancouver Dance City Theater, under the direction of Roberta Baseggio. From 2012 to this day he collaborates with the Roman group MK, directed by Michele di Stefano, participating in productions like Parete Nord, Robinson and Impressions d’Afrique. In 2013 he danced “Mishima” by Ismael Ivo in the frame of the Napoli Teatro Festival. From 2014 to 2015 he collaborated with the dance company Artemis Danza by Monica Casadei. From May 2015 he has been part of the Balletto di Roma, under the artistic direction of Roberto Casarotto, dancing for different choreographers such as Alessandro Sciarroni, Chris Haring, Itamar Serussi Sahar, Francesca Pennini, Giorgia Nardin and Chiara Frigo. In 2017 he took part in the production of “Hekla” by Fabrizio Favale and for Balletto di Roma he performed in the project “D for the Performance” at the Maxxi museum in Rome. Since 2019, he has been collaborating with choreographer Alessandro Sciarroni on the project Turning.

Siro Guglielmi – Born on 8 November 1992 in Vicenza, he completed his training as a dancer at the School of Ballet in Florence, Tuscany. He has danced for the youth company Junior Balletto di Toscana, for the Maggio Musicale Fiorentino theater in Magda, for DanceCyprus, for the Israeli choreographer Itamar Serussi Sahar and, from 2015 to 2017, for Balletto di Roma. He attended the DanceMakers2 professional training course, supported by the Veneto Region, in Bassano del Grappa CSC, developing his choreographic research and creative practice. Since 2017, his first p! Nk elephant creation has been presented in numerous theaters and site- specific venues, in festivals such as Opera Estate Festival Veneto, Interplay Turin, Bolzano Danza and the showcase of the Young Danza D’Autore. His work has been selected, presented and promoted by the Italian network Anticorpi XL. He has taught in various professional environments, both in Italy and abroad. His creations have been produced and supported by: Zebra Cultural Association, CSC center for the contemporary scene in Bassano del Grappa, Teatros del Canal (Madrid) and the Italian Cultural Institute in Madrid. In 2018 he was invited by Teatros del Canal for a creative residence, during which he was offered professional training and a first public showcasing. One of his works was selected from DNAppunti coreografici of 2018. He continues to collaborate as a dancer with other creators and in 2018 was involved in the work of choreographers Andrea Costanzo Martini and Silvia Gribaudi. In 2018 he was the Italian artist chosen for Duo à trois voix / Duo with three voices, a research and creative partnership between CSC – Bassano del Grappa and Circuit-Est center choréographique Montréal, together with Canadian choreographer Marie Beland and playwright Ginelle Chagnon. Since 2019 he has been collaborating with Italian choreographer Silvia Gribaudi on Graces.

Fabio Novembrini – Born in Bari, he began his studies of classical, modern and contemporary dance in his city. From 2011 to 2014 he deepened his knowledge of classical and contemporary techniques in Florence at the school of the Balletto di Toscana directed by Cristina Bozzolini. From 2012 to 2013 he joined the contemporary youth company “Antitesi Ensemble” by Arianna Benedetti. In 2014 he was selected for a project called “Proofs of Author xl” directed by “Anticorpi di Ravenna” working with Tiziana Bolfe Briaschi, Masako Matsuchita, Maristella Tanzi and Riccardo Buscarini. Between 2014 and 2015 he expanded his studies in Berlin at the “Marameo”. Back in Italy, in February 2015, he performed among the finalists of the “Premio Equilibrio” competition in Rome with choreography by Tiziana Bolfe Briaschi. In June 2015 he was selected as Italian Dance Artist for the biennial European research project “Dancing Museums’, performing his creations in the most important European museums, including the Louvre in Paris and the National Gallery in London. In the same year he joined the staff of the contemporary company “Balletto di Roma” under the direction of Roberto Casarotto, participating in productions by Itamar Serussi, Alessandro Sciarroni, Chris Haring, Francesca Pennini, Giorgia Nardin and Chiara Frigo. In 2015, as part of a residency at CSC (Center for Contemporary Scene in Bassano del Grappa), he created “Shelter”, his first work together with Roberta Racis, performed inaugurally in Feltre for the “Dance Raids” festival. “Shelter” was then performed site-specifically in Venice at the Punta della Dogana Museum as part of the “Set Up” event. With “Shelter”, Fabio Novembrini and Roberta Racis, were selected to participate in the 2016 Young Dance Showcase of the Anticorpi XL Network of Ravenna. In 2017 he became a teacher of Dance Well – movement research for Parkinson, conceived and activated by CSC Centro for the Contemporary Scene of Bassano del Grappa. In 2018 he became a freelance dancer and collaborated with Sang Jiijia in the production “Re-Mark”, the Kinetic Collective in the production “How to destroy your dance” and with choreographer Masako Matshushita in the production “Trusted Devices”. In September 2018 he was selected as performer for the exhibition “The Cleaner” by Marina Abramovic at Palazzo Strozzi in Florence. In 2019 he became the Italian artist chosen for Duo à trois voix / Duo with three voices, a research and creation project in partnership between CSC – Bassano del Grappa and Circuit-Est center choréographique Montréal, together with choreographer and dancer James Viveiros and playwright Ginelle Chagnon. In 2019 his solo “When I was in Stockholm” was selected, presented and promoted by the Italian network Anticorpi XL and performed at the CCDC Dance Festival in Hong Kong. With the project ‘Memories of the Crossing of the Sea’, in collaboration with Giovani Francesco Giannini and Valentina Zappa, he was a resident choreographer and lecturer at Er Gao Dance Production Group in Guangzhou and for the Hong Kong CCDC festival.

Roberta Racis– she is an Italian dancer and choreographer based in Rome. From 2015 to 2018 she was part of the Italian company Balletto di Roma, under the artistic direction of Roberto Casarotto, dancing in productions of numerous choreographers such as Alessandro Sciarroni, Chris Haring (Liquid Loft), Itamar Serussi Sahar, Paolo Mangiola, Francesca Pennini, Chiara Frigo , Giorgia Nardin. For the Balletto di Roma she created the solo “Borders”, making her debut in 2017 at the Fabbrica Europa festival and was also a choreographer for the “Danzare la performance” project in the MAXXI museum in Rome and the “Reveal” project at the Palazzo Grassi museum in Venice for the Punta della Dogana festival / Set Up. Since 2017 she is one of the five creators of the European Performing Gender project promoted by Yorkshire Dance Leeds, City of Women in Ljubljana, Paso a 2 Certamen Choreography of Madrid, Theaterfestival Boulevard’s Hertogenbosch, CSC of Bassano del Grappa and Gender Bender Festival. Since 2018, she collaborates with Alessandro Sciarroni for the Augusto project and for the Turning project, as well as with choreographer Masako Matsushita. Since 2019 she collaborates with the Italian choreographer Francesco Marilungo. In 2020 she will be part of the European Networking Project Dance & Dramaturgy for Theater Sevelin 36 of Lausanne, La Bellone Brussels, Bora Bora Aarhus and CSC of Bassano del Grappa. Her first choreographic work “Shelter”, created with the dancer Fabio Novembrini, was selected for “Vetrina della giovane danza d’autore” by the Anticorpi Xl Network of Ravenna and performed in several festivals like the Milan Triennale Exister Festival, the DAB of Bari and Feltre Dance Raid for the OperaEstate Festival, Veneto. In Lisbon she worked at the CPBC (Companhia Portuguesa de Bailado Contemporaneo), in co-production with the Internationaal Danstheater Holland, under the direction of Vasco Wallenkamp, on the production “Fado” , which was included among the best productions of Dance Europe magazine. In Brussels she has collaborated with several choreographers among whom Natalia Vallebona, Amanda Xuehai and Yassine Payne (UltimaVez).

Silvia Sisto– Born in Bari in 1993, she began her studies at Studio Danza (BA). In 2009 she received a scholarship for the School of Ballet of Tuscany directed by Cristina Bozzolini; in her second year she joined the staff of the Junior Ballet of Tuscany for two years. After another year of training in London he received her first contract for the Oniin dance company, with which she participated in numerous international festivals. She has also worked with the Turin Ballet Theater, the Teatro Regio in Turin, the Lausanne Opera, the Ballet of Rome, the Royal Opera House in Muscate, the Opera Royal de Wallonie and Equilibrio Dinamico Dance Company. She currently works as a freelance dancer for Stefano Poda, Roberta Ferrara and Riccardo Buscarini.