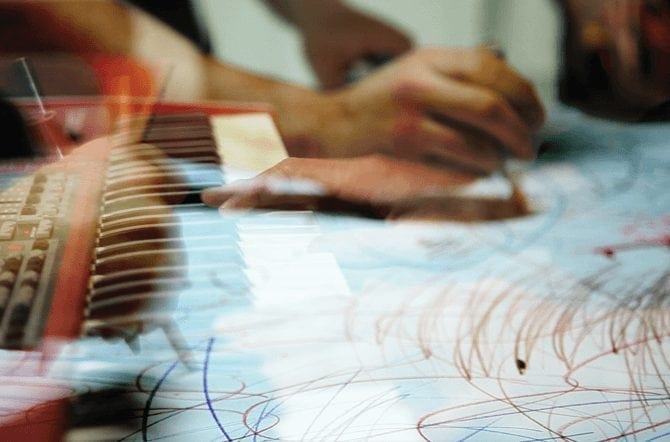 SINGLE TICKET WITH ACROSS THE LINE

Pens, pencils, marker pens and an electric piano form the weird and wonderful music ensemble for ‘Matita’ (Pencil), a score based on an idea by Fabio Bonelli. In ‘Matita’, an established quartet of musicians -and drawers- sits around a table and improvises on sheets of paper amplified for the occasion. The ensemble is accompanied by musician Antonello Raggi, who not only plays electric piano, but has also devised the audio and video software for the show. The result is a series of short spontaneous pieces – improvisations, like doodles on paper, or sounds sketched in the air. Improvisation is, in fact, one of the distinctive features of Bonelli’s style, as is the interaction between traditional instruments and other elements. One of his previous works, ‘sii bih dii’, was composed to be played in the open air as it was directly dependent on shifts in the weather. In ‘Matita’, the audience is involved in the making of the piece. In the afternoon before the show begins, spectators can draw/play on amplified tablets alongside other spectators/performers. This joint effort makes for improvisation en masse, while the video projections recording the drawings provide visual evidence of the project.