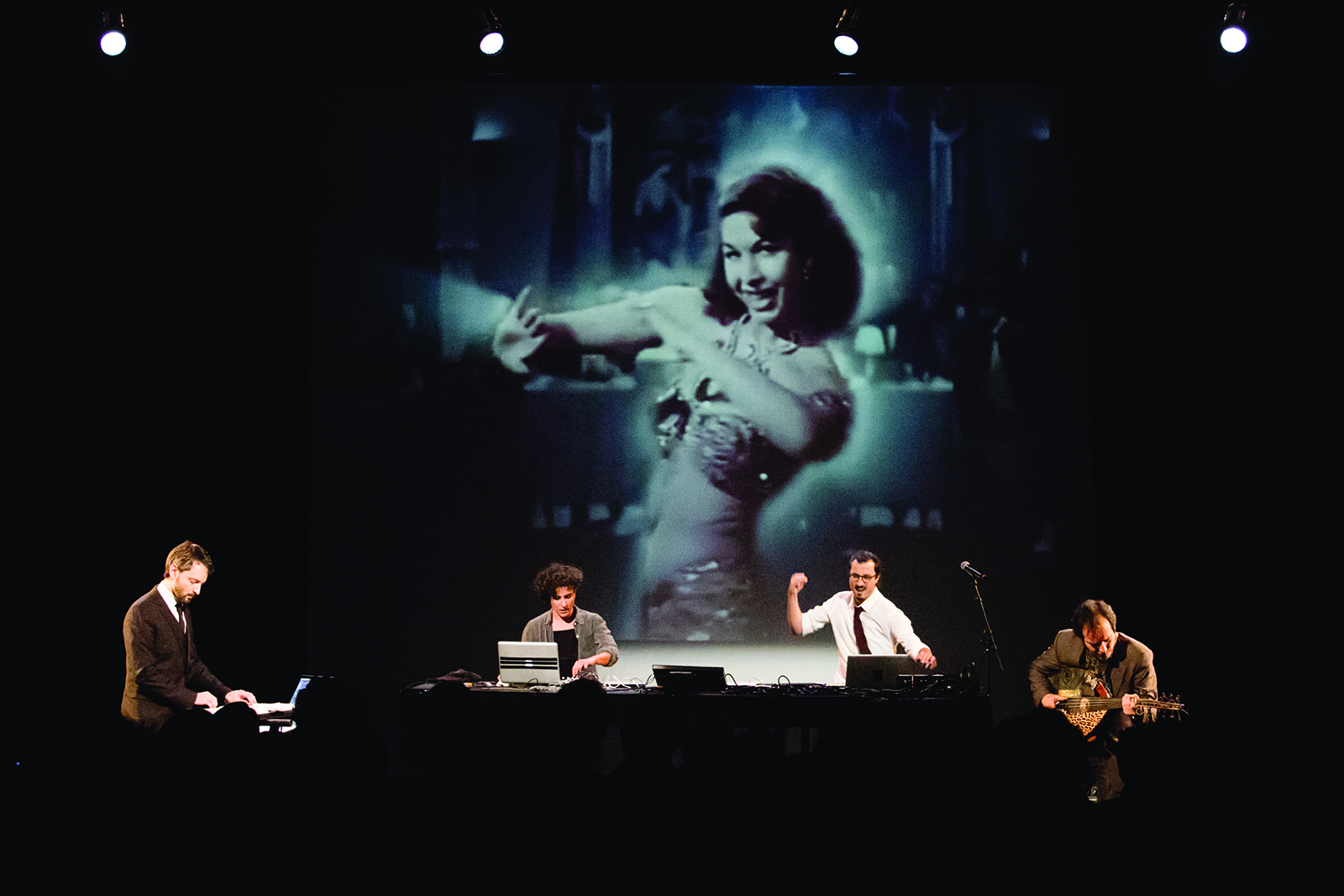 Abdullah Miniawy is a poet, singer and icon of an Egyptian youth fighting for freedom and justice. His hypnotic voice meets the trumpet of Erik Truffaz– a great figure of European jazz- the sax of Peter Corser and the cello strings of Karsten Hochapfel in a live performance halfway between rock, Sufi poetry, jazz, electronica, eastern sounds and slam poetry, and which tackles political, social and religious repression by transcending identity and boundaries.

Born from the encounter between the hip hop of Rayess Bek, the images of artist Randa Mirza, the electronica of Mehdi Haddab and the bass of Julien Perraudeau, Love & Revenge is both an evening of electro-pop and an homage to a golden age of the Arab world: that of cinema and musical comedies with melodramatic and sentimental stories about divas and musical stars. The result is a fun remix of songs and movie images, a bridge between eras, identities and cultures.

Le cri du caire
Abdullah Miniawy – Abdullah Miniawy is a writer, singer, composer, trumpeter, sound-designer and producer from Cairo, Egypt. With roots in the spoken-word culture, he explores the idea of stricto sensu fusion by merging particularly diverse projects together – revisiting traditional Spanish music with Hyperotamus through an experimental project, fusing Sufi and electro music with the German project Carl Gari & Abdullah Miniawy, improvising pieces in collaboration with other artists… He questions transdisciplinarity and what brings people together. A political icon of the Egyptian revolution, Miniawy has performed alongside Erik Truffaz and Yom at Festival La Voix est Libre’s 2017 & 2018 editions.
Peter Corser – Living and working in Paris since 1995, Peter Corser has collaborated with numerous ensembles, experimental musicians, dancers, singers, rappers, visual and circus artists as well as theatre companies. His collaborations include SighFire, DCA Cie, Philippe Decouflé, Kaori Ito, Nosfell, Médéric Collignon, Jörg Muller, André Minvielle, Sanseverino, Benjamin Siksou, Himiko, Marlène Rostaing… Mastering the technique of « circular breathing », Peter Corser invites his saxophone into an infinity of pieces, including improvised ones.
Kaesten Hochapfel – Karsten Hochapfel’s musical journey began at 8 years old with a cello. In 2001, he entered the Munich Conservatory to study jazz guitar with Peter O’Mara, classical guitar with Gabriele Prediger-Mahne and Barbara Polaçek and cello with Jan Polaçek and Katalin Rootaring. Musical diversity is what truly matters to him – he performs with jazz or world music groups, creates new musical arrangements and translates scores with musicians from all over the world, in France, Malawi or Brazil. Karsten introduces music here and there, wherever he can share and learn.

Love and revenge
Rayess Bek – Wael Koudaih was born in Nabatieh, Lebanon in 1979. He holds a Master of Professional Studies in Applied Arts from the Academie Libanaise des Beaux Arts (ALBA), a post-diploma from the Ecole Nationale Superieure des Arts Deco (ENSAD) in Atelier de Recherche Interactive, and a Master 2 of research in Contemporary Art and New Media from the Université de Paris VIII. Since 2002, Wael goes by the pseudonym “Rayess Bek” one of the major performers of Hip Hop and urban music from the Arab World. Wael is an author, composer, and interpreter, who has released seven albums and performed more than 400 concerts worldwide. He also participates in residence programs in creative writing in Europe, the United States, and the Middle East, where he gets the chance to meets and learn from such artists as Rodolphe Burger, Frank Fitzpatrick, and Miles Copeland.  In 2015 Koudaih did another collaboration this time with photographer Randa Mirza. Together they created “Love and Revenge” an audio-video concert that aims to give a second life to old Arabic popular songs and movies by adapting them to the patterns and aesthetics of today’s music. Picture what would become of the Arabic variety if we decide to bring new influences to that culture?

Randa Mirza  – Lebanese Randa Mirza (b. 1978) is a visual artist and freelance photographer, dividing her time between Beirut and Marseille. Her work has received numerous prizes. Mirza play VJ sets at Medialab Prado and Matadore Madrid within LaptopsRus and at Timitar music festival in Morocco. She regularly performs live video sets in events supporting environmental and social causes. Her work received a grant from AFAC (Arab Fund for Art and Culture), Al-Mawrid Al- Thaqafi and the Secretaria de Relaciones Exteriores de Mexico. She was artist resident at NIFCA (Nordic Institute for Contemporary Arts), HIAP (Finland) and at fondazione Bevilaqua La Masa (Venice). Mirza is also an official collaborator to the photographic agency Picturetank, a member of Vol de Nuit artistic committee and a regular collaborator to Zoukak cultural association.