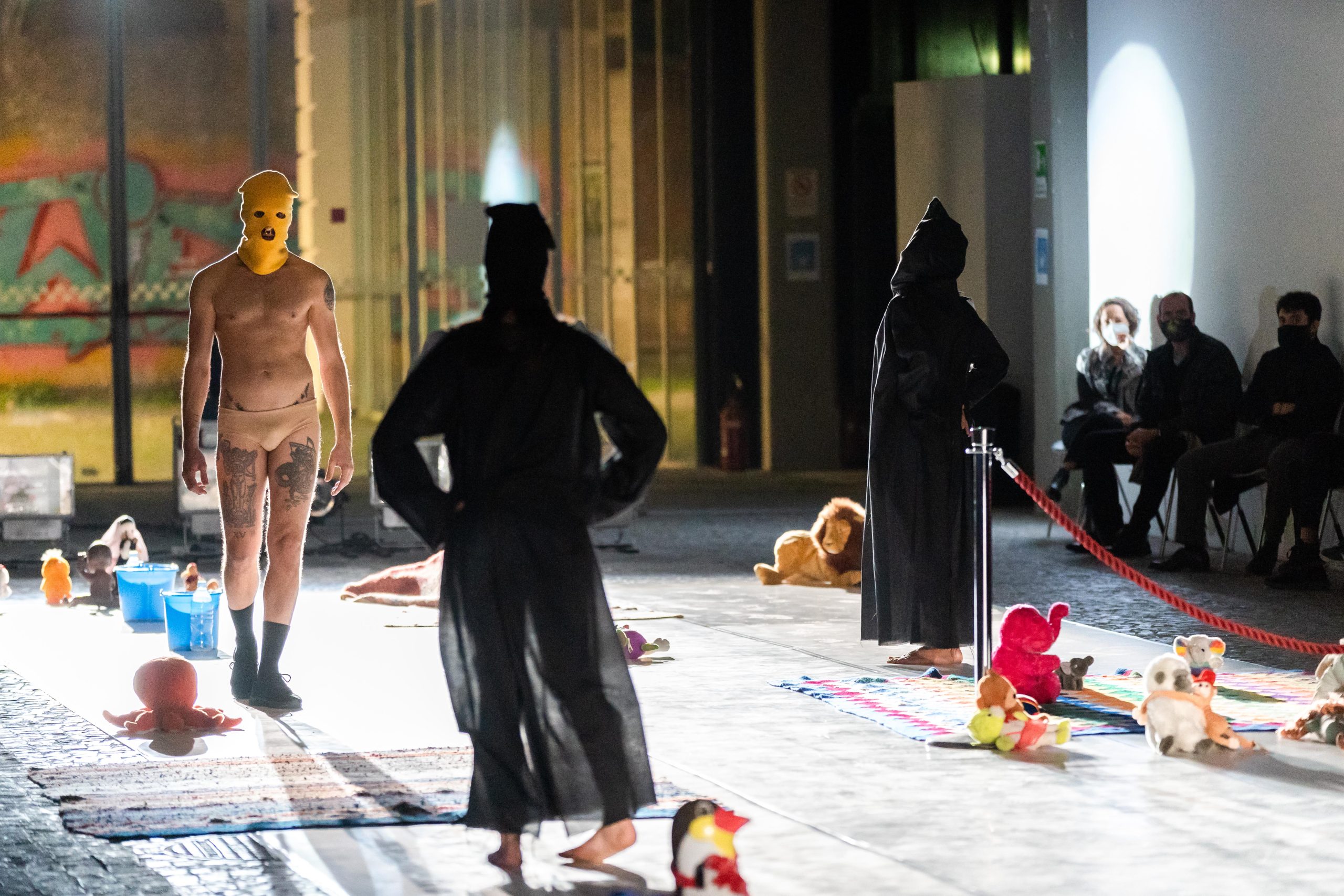 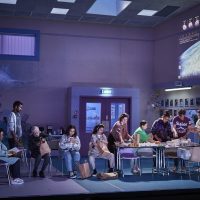 The second chapter of the journey is Coefore Rock & Roll, which combines a site-specific concert with an expansive and horizontal choreographic vision, involving visual and spatial elements in trans-medial and trans-disciplinary forms. The ferocity of a looming crime, set within a realm of childhood nightmares, broken toys and colored blankets (a visual representation inspired by artist Mike Kelley), places the individual and humanity as a whole into question, by focusing on the act of killing the life-giving Parental figure. The piece examines the duality of Orestes: a hero imprisoned in the conflict between creating a new world-order and being damned for life for the murder of his own mother.  Also imprisoned in the cold cycle of relentless love and revenge, the icy and passionate figures of Clytemnestra and Electra stand out, accompanied by the tribal echoes of the Erinyes, in a chorus led by Lady Maru- herself an icon of club culture and experimental Roman and international techno music. The choreography combines text, vision and performative action, within the framework of a liquid and poetic dramaturgy. With this hybrid form, the performance assimilates other disciplines, such as music and visual art, in particular. The result is a choreographic installation framed by an expansive dramaturgical construct and animated by the collaboration of Maria Paola Zedda and by Gianni Staropoli’s visionary lighting design.

Director-choreographer, Enzo Cosimi is among the most authoritative in contemporary italian choreography. Guest choreographer at the Scala of Milan and the Teatro Comunale in Florence. Over the years, the creations of Compagnia Enzo Cosimi have been presented at the major theatres and festivals in Italy and travelled in tour in Europe, USA, Peru, Australia, India and Japan. He has created productions with his Company for the most prestigious of international festivals and theatres, collaborating with Italian and international artists of excellence, including, Miuccia Prada, Luigi Veronesi, Richie Hawtin, Aldo Tilocca, Louis Bacalov, Aldo Busi, Daniela Dal Cin, Robert Lippock and Fabrizio Plessi with whom he created Sciame, the first work of Italian dance-video. In 2006 he created and directed the choreography for the Opening Ceremony of the XX Winter Olympic Games in Turin, starring the étoile, Roberto Bolle, and 250 performers. In March 2012, Enzo Cosimi’s first work, Calore, was restored and represented as part of the RIC.CI Project curated by Marinella Guatterini.
During his carrier, Enzo has brought to the stage more than 40 original productions with his Company. Sopra di me il diluvio, presented at the Biennale of Venice in 2014 won him the Premio Danza&Danza for Best Italian Production on the Year and also the Premio Teriscore was awarded in 2015 to Paola Lattanzi as Best Contemporary Interpreter.
In the last years, Cosimi created two trilogies: Sulle passioni dell’anima (On the passions of the soul) about collective fear, desire and pain, and Ode alla Bellezza – 3 creations on diversity (Odes to beauty: 3 creations on diversity) investigating the social and political sphere, talking about homeless people, homosexuality in mature life and its relationship to contemporary and FtoM Trans people.
From 2018 he has been working on a new project, Orestea – Revenge Trilogy, that has its debut with Glitter in my tears – Agamennone, and followed, in 2020, by the second chapter, Coefore Rock&Roll – performance version, at Romaeuropa Festival. In 2019 created at Romaeuropa Festival a formation/performance project in collaboration with National Dance Academy, National Theatre Academy and Fine Arts Academy. In 2018, Cosimi received the National Critics Prize ANCT. In 2019 the biography “Enzo Cosimi, una conversazione quasi angelica – 10 questions for domestic use” by Maria Paola Zedda has been published by Editoria e Spettacolo publishing in the series attended by Paolo Ruffini and Matteo Antonaci.

In collaboration with Romaeuropa Festival