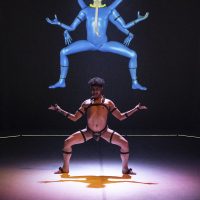 The entire artistic career of Noé Soulier – one of the greatest exponents of French dance today – is characterized by a careful and refined combination of choreographic practice and theoretical reflection. Rich and sophisticated, his vocabulary of movements is constantly nourished by the most immediate gestures of daily life, such as grabbing, throwing, capturing, rubbing, and their relationship to space. Staged precisely within spaces not intended for dance, Passages is a nomadic project that explores the relationship between the movement of bodies and the places where actions are inscribed. A site-specific event that, for REF 2022, occupies the wonderful spaces of the French Academy – Villa Medici, articulating a path of scattered choreographic phrases, a contemplative journey in which the performers seem to absorb and rework the charm and history of the place, and in the process, resonate with its architecture, weave relationships with real and imaginary objects and invite us to a new perceptual and emotional exploration.

Noé Soulier’s work explores choreography and dance in both performative and discursive settings, ranging from the black box to the museum to the written page. The series of choreographic pieces including Removing (2015), Faits et gestes (2016), and The Waves (2018) work to activate viewers’ corporeal memories with movements aimed at absent objects or events, and which consequently suggest more than they show. In projects like the book Actions, Movements and Gestures (2016) and the performance Movement on Movement (2013), he analyses different approaches to conceiving dance movement that offer multiple ways to experience the body. The choreographed exhibition Performing Art (2017), created at Centre Pompidou, Paris, reverses the usual position of dance in the museum by bringing the museum to the dance stage, turning professional art handlers into performers and the installation of art works into choreography. Soulier thus pursues a practice that is at once conceptual and intensely dance-based.
Born in Paris in 1987, Noé Soulier studied dance at the CNSMD in Paris, at the National Ballet School of Canada, and at PARTS — Brussels, and holds an MA in philosophy from the Sorbonne (Paris IV University) and took part in the Palais de Tokyo residency programme: Le Pavillon. In 2010 he won first prize in the Danse Elargie competition organised by the Théâtre de la Ville and the Museée de la Danse. From 2015 to 2019 he was artist in residence at the Centre National de la Danse in Pantin. His works have been coproduced, among others, by the Festival d’Automne à Paris (FR), Kaaitheater Brussels (BE), Tanz im August /HAU Berlin (DE), Théâtre National de Chaillot (FR), Centre Pompidou (FR), PACT Zollverein Essen (DE), Tanzquartier Vienna (AU), Teatro Municipal do Porto (PT), CDCN Toulouse (FR).
He has also been commissioned to produce choreographies for the Ballet du Rhin (D’un pays lointain, 2011), the Ballet de Lorraine (Corps de ballet, 2014), the Fondation Louis Vuitton (Movement material, 2014), Los Angeles Dance Project (Second Quartet, 2017), and the Ballet de l’Opera de Lyon (Self Duet, 2021).
In July 2020 he became director of the Cndc – Angers.
Founded in 1978, the Cndc – Angers (Centre national de danse contemporaine) is a unique institution in the world of dance in that it combines a creative choreography centre, a higher school of contemporary dance, and a programme of dance performances.