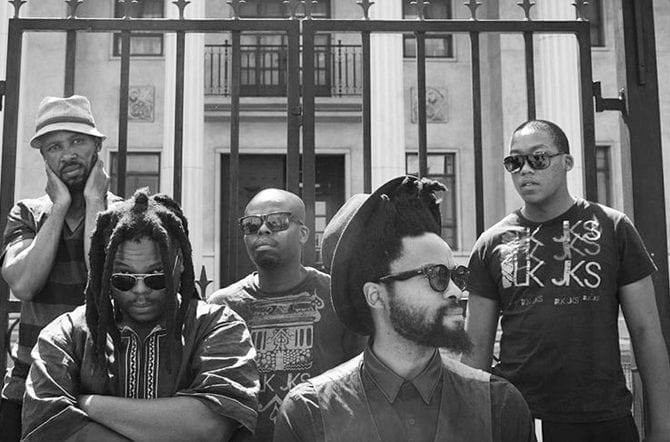 BLK JKS -pronounced Black Jacks- are a South African rock band. Over the past few years they have literally bewitched the international press, gaining prominence as one of the most striking bands on the contemporary African music scene. Between 2009 and 2010, the Canadian record label Secretly Canadian produced ‘After Robots’ -their first and only album- along with two EPs. Rolling Stone praised ‘After Robots’ -and dedicated a cover to BLK JKS- while a reviewer of the more upmarket Pitchfork called the project: «A hugely ambitious album, with swooping forays into kwaito, ska, reggae, ambience, jazz, prog». In fact after listening to their music for the first time, the renowned DJ/globe-trotter Diplo described them as the South African version of TV on the Radio. ‘Lakeside’, one of the tracks on the ‘After Robots’ album, was on the Fifa 2010 soundtrack, testifying not only to the band’s pop soul but also to its eclecticism. BLK JKS have thus created a brand new music style which is not ascribable to any specific genre. Having once cut themselves off from their homeland, they returned with an energy that enabled them to shatter, and renew, African traditional music. Now, after a five-year hiatus interspersed with occasional guest performances – they released the mixtape ‘Africa in your Earbuds’ and, more recently, Dave Grohl wanted them to open at the Foo Fighters Johannesburg concert – the band of Mpumelelo Mcata (who recently directed the film ‘Black President’), Molefi Makananise, Tshepang Ramoba, Hlubi Vakalisa and Tebogo Seitei, finally comes to the Romaeuropa Festival with their new album as part of the Afropolitans program. The concert promises to be a startling musical event permeated with a distinctively African feel delineated by alternative rock. As a reviewer of Rolling Stone predicted back in 2010, the concert will not only show that BLK JKS is Africa’s answer to The Smiths and the Cure, but will also become what rock‘n’roll has been waiting for since The Doors’ demise.