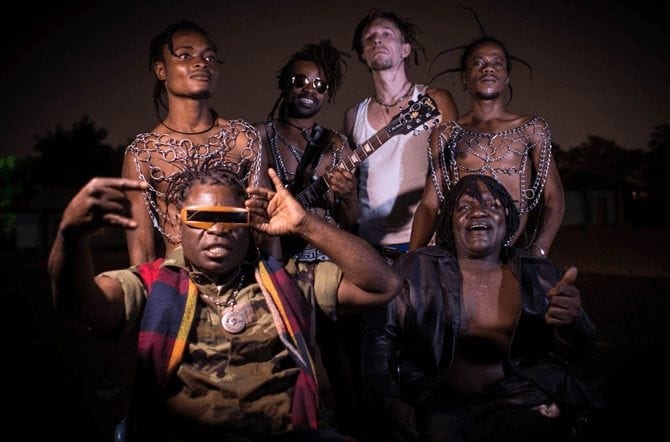 Mbongwana Star, a newly formed 7-piece band from the Democratic Republic of Congo, are preparing for the May release their debut album, ‘From Kinshasa’, and associated European tour. ??Coco Ngambali and Theo Nzonza first formed a band fifteen years ago, inspired by their love of Congolese rumba and its pantheon – Franco, Tabu Ley Rochereau and Pépé Kallé. That band, Staff Benda Bilili, hit the big time: two major albums, a world tour and starring roles in the acclaimed film ‘Benda Bilili’. Inevitably, the big time hit right back. The band collapsed under the weight of its own success. ??But in the shanty-villages of Kinshasa – Africa’s third largest city – bands are recycled along with everything else. Music and musical instruments, just like fashion, art, jewellery, pedal-power contraptions and motor vehicles, all rise from the inexhaustible scrap heap. Coco and Theo gathered up the necessary parts of a band from the younger generation, crammed them together and started belting out a shambles under the name Mbongwana Star – ‘mbongwana’ meaning ‘change’. They were indeed looking for change, for something new. ??That’s when they met Liam Farrell, aka Doctor L, a maverick musician and producer on the Parisian hip-hop and electro scenes who produced Tony Allen’s ‘Black Voices’ and who was looking to find the punk ethic alive in Kinshasa’s raucous swelter-skelter. The music that Coco and Theo played to Doctor L was vigorous – a heedless mass assault of percussion, guitars and voices on the edge of tearing itself apart with its own momentum. Some form of collaboration seemed inevitable. ??Though he’d eventually play on and mix the album, Doctor L initially set out simply to record as much as he could, chipping away, paring down, honing. “It’s all recorded in the red,” he says over a dodgy Skype connection. “Sometimes I over-boost mikes that are recording nothing, just to pick up the kind of environment that’s around me now. Can you hear it? There are three TVs going full blast. Distortion multiplies the energy. I love it!” ??And the result? A fusion (‘too smooth and seamless a word for this angular hodgepodge’ according to The Guardian) of traditional Congolese rhythms with a big fistful of European post-punk bass and busted electronics. ‘Afrobeat with a solid steel casing’, says Fact Magazine. ??So this isn’t what you would expect from a Congolese band or even an African sound. Like the weird Congo Astronaut that haunts their first video, ‘Malukayi (feat. Konono No.1)’, Mbongwana Star is a naturally occurring, smashed-together combination of things that’s both unexpected and somehow inevitable, too. It’s made from bits of the past and points toward a strange but exciting kind of future, but more importantly you can tell that it’s just loving the present.