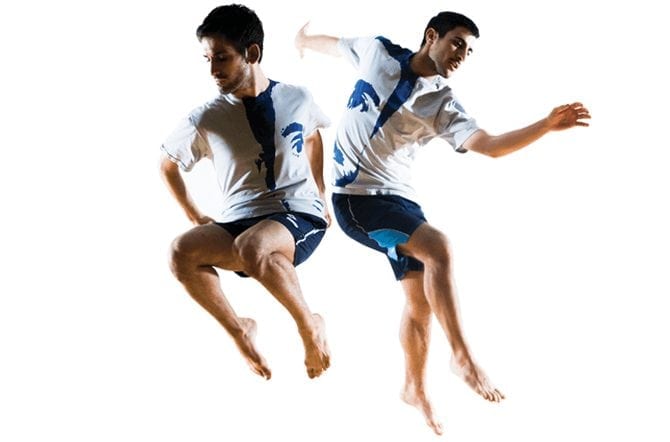 Igor and Moreno are two young, promising British choreographers of Spanish and Italian descent, respectively. They will open ‘DNAeurope meets Aerowaves’, a European network devoted to experimental dance with which Fondazione Romaeuropa has been partnered since the beginning of the year. The duo Igor and Moreno was selected for the Aerowaves Priority list in 2015. ‘Idiot-Syncrasy’ is an ironic, breezy choreography. It was born out of the economic crisis, and it focuses on desires in a time of frustration. Igor and Moreno, who are both choreographers and dancers of this piece, invite the audience to reconsider their desires and to look for happiness in their own body, its actions and relationships with other people, in order to overcome dissatisfaction. Their research originates from their willingness to express ideas through movement, voice, sound and design. In ‘Idiot-Syncrasy’, Igor and Moreno enter the stage and strike up some verses of a traditional Eighteenth Century Sardinian song, thus triggering a crescendo that sets in motion a jumping dance. They jump and move across the space, they disappear and reappear, they hint at actions and try to involve the audience in them. Frustration always lies in wait, it triggers new twists and scene changes, so that the two performers manage to drive it away and finally give in to a liberating embrace. In ‘Idiot-Syncrasy’ Igor and Moreno use their voices as an extension of their bodies. They emphasize the concept of universality by singing in five different languages. The set is sober and without frills, the light design consists of a single color that expands and reduces the surrounding space and has an effect on the performers. Igor and Moreno met in 2006 while they were training at the London Contemporary Dance School (The Place). In 2009 they founded the dance collective BLOOM! In 2010, ‘City’, their first major work, received the Rudolf Laban Award and an artist residency by Prix Jardin d’Europe 2010. In 2011, it got selected for the Aerowaves Priority list. In 2012 they founded the dance company Igor and Moreno, with which they devise their current projects.