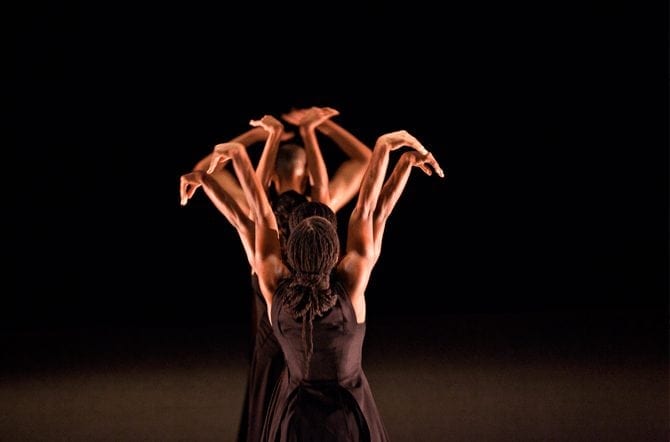 ‘Kaash’ by Akram Khan was presented for the first time at Romaeuropa Festival back in 2002. It will be presented again this year in the new 2014 version, a revival of the 2002 full-length work. Kaash is an extremely beautiful choreography that left a profound mark on the scene of contemporary dance, and foregrounded the figure of Akram Khan internationally. Born in Great Britain into a family of Bangladeshi immigrants, Khan began dancing at the age of seven and trained in the classical South Asian dance form of Kathak. Afterwards, he studied Western contemporary dance. Both dancer and choreographer, Khan fused different and distant genres and gave life to his own distinctive style, a blend of classical kathak and contemporary technique that made him famous all over the world, and that he first explored and asserted in ‘Kaash’. It is no accident that the set and the music of this show were devised by sculptor and architect Anish Kapoor and by Nitin Sawhney – both of them have Eastern origins, but are based and work in the West. The choreography is divided in three parts, each one based on a different aspect of Shiva, one of the main deities of Hinduism: cosmic violence, meditative nature, and the eternal cycle of creation and destruction. Rather than telling a story, Kahn’s unrestrained style emerges through simultaneous and interdependent group movements that give life to a fascinating symbolic universe. In this show, Khan perfectly blends the gestural and body cultures of the East and the West by using a personal and extremely contemporary language. When ‘Kaash’ firstly opened in 2002, Khan came into the limelight as a new talent in the realm of choreography. The show itself became a manifesto of intercultural synthesis, which has been a distinctive feature of contemporary dance so far. After more than ten years, Khan decided to restage ‘Kaash’ and to cast an Italian dancer, Nicola Monaco, as the leading role he once danced.


Produced by Farooq Chaudhry Associate Producer for the Revival Bia Oliveira Kaash was originally created with the generous support of Southbank Centre (London), Tramway (Glasgow), Vooruit (Gent), Sampad (Birmingham), DanceEast (Ipswich), Maison des Arts de Créteil, Wexner Center for the Arts at the Ohio State University with support from the Doris Duke Charitable Foundation Kaash was also created with generous support from The Quercus Trust, The Jerwood Space, Birmingham DanceXchange The 2014 revival of Kaash was supported by a residency at Trinity Laban Conservatoire of Music and Dance, London Akram Khan is an Associate Artist of Sadler’s Wells, London Supported by  Arts Council England