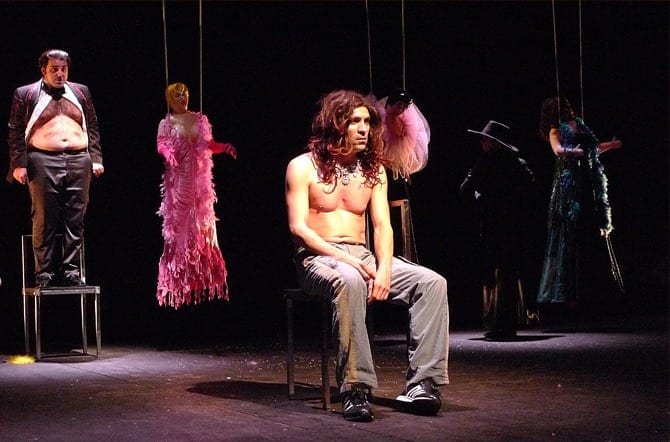 Emma Dante’s distinctive style is evident in the very first lines of her director’s notes: «This is a story about Pietro, a boy who was born in a small town in Southern Italy. He was born in the wrong body near the foot of Vesuvius, he was born a girl and speaks in falsetto. He has a passionate, warm-blooded soul that has been influenced by the volcano». Her show ‘Operetta burlesca’ (Burlesque Operetta) was cancelled in 2014 due to circumstances beyond Fondazione Romaeuropa control, but if finally comes to the Festival this year. The South and the issues of diversity, difference, and marginality are brought together, as if they were the same thing, as if the South itself corresponded to difference and marginality. Italian provinces are also a central theme of the show, because, if one looks at them closely, they are a treasure house of national stories. Bodies are also closely investigated; when they are “wrong”, they become even more interesting. In recent years, director and playwright Emma Dante made a name for herself because of a theatrical style characterized by the physicality of the actors – a physicality that is able to convey stories and adventures. Actual words, often uttered in regional dialect, loose their traditional function and turn into pure sound and voice – they become, literally, embodied language. In ‘Operetta burlesca’ Emma Dante directs a group of actors she has often worked with. She refines her original and surreal language, a distinctive feature of her shows that the audience has come to associate with her work. Pietro’s story tells about his loves, his melancholy, his job at a filling station, his escapes from the provinces to the city of Naples in search of space, anonymity, and women’s clothes and shoes in which he can feel more at ease with, but that he can only wear in secret in his room. All of these details are metaphors for a society, but also for «a striptease of the soul» as Emma Dante suggests. «I wrote this story», she explains «because I hope that Italy will soon fall into line with Europe as far as same-sex unions are concerned. I hate the suppression of true desire, as well as the repression of talent». She refers to those passions that are always about to explode as is Vesuvius, the Neapolitan volcano that emblematically influences Pietro’s personality. Indeed, a volcano seems to be smoldering below Emma Dante’s shows.