Teatro Argentina
Tuesday and Wednesday 9pm
from € 18 to € 35 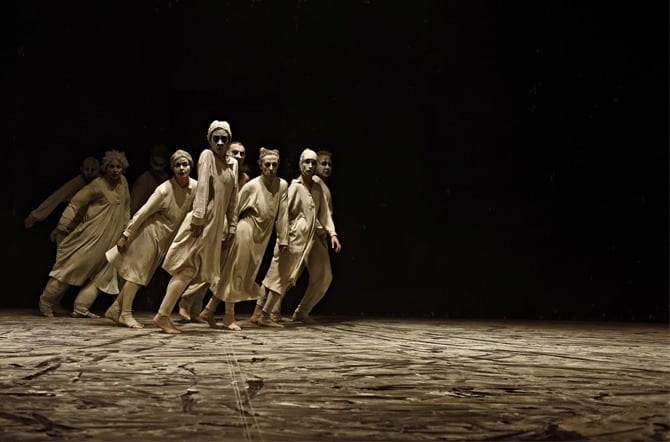 Romaeuropa Archive Festival 2015 May B

Maguy Marin’s dance company is by now considered an important part of the historic formation of French contemporary dance. The company comes back to Rome to celebrate Romaeuropa’s thirtieth anniversary with ‘May B’, a show inspired by the work of playwright Samuel Beckett and that nowadays is considered a classic. Maguy Marin was born in Toulouse to Spanish parents who had fled from Francisco Franco’s regime. She studied ballet, was admitted to Mudras dance school, and afterwards became a member of Maurice Béjart’s company. Finally, she devoted herself to her own choreographies and founded her own dance company. Her choreographies share their distinctive features with the noblest expressions of dance-theatre, an art form that originated in Europe during the Seventies. Marin’s pieces are often seen as political, in the sense that her entire work revolves around the human condition. In the early Eighties, while she was working on ‘May B’, Marin met Beckett in person. In fact, her piece is permeated with the same humor, tragic vision, and redemptive cynicism that characterize the work of the Irish writer. Because of its political and philosophical connotations, ‘May B’ is nowadays considered one of the most emblematic choreographies of French contemporary dance. The music is by Franz Schubert and Gavin Bryars. Ten dancers, with their faces covered with white chalk, communicate with each other, go round in circles, and collide with each other. The performers reconcile dance and theatre – they bring to the stage the ironic impossibility of living together, and at the same time they fret because of their tragic failure to be alone. ‘May B’ has been in Maguy Marin’s repertoire for thirty-five years, and it has been performed more than seven hundred times in five continents.