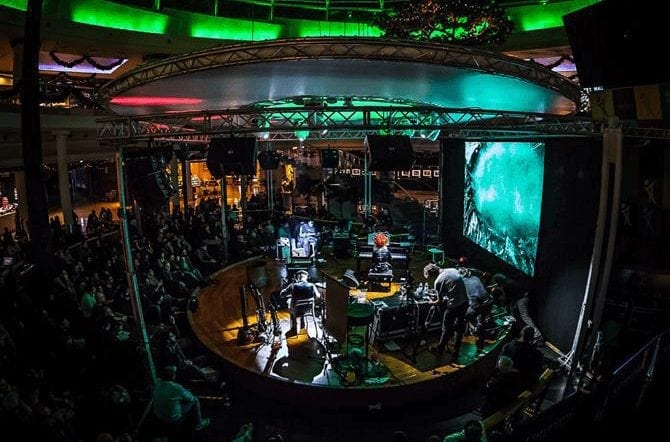 ‘nulla è andato perso’ (nothing has gone lost) is a blend of progressive rock, electronic music and visual art. It marks the beginning of the collaboration between three musicians (Gianni Maroccolo, Alessandra Celletti, and Beppe Brotto) and Masbedo. Masbedo is a duo formed by Nicolò Massazza and Iacopo Bedogni, two artists who have worked together since 1999 and who express themselves through the language of video in different forms such as performance, theater, installation, photography and recently cinema. Maroccolo, whose stage name is Marok, was the drummer of the rock-band Litfiba before he became an important figure of the Italian independent music scene. He met pianist Alessandra Celletti in 2011, when they worked together on the project ‘Sketches on Sacagawea’. Afterwards, the two artists collaborated with Claudio Rocchi in making the record ‘VdB23/Nulla è andato perso’. From that creative collaboration originated the concert ‘nulla è andato perso’, which will be presented at Romaeuropa Festival this year. Musician Beppe Brotto will also be on stage, playing and interacting with a video performance devised by Masbedo. It is no accident that the concert starts with ‘Opening’ by Philip Glass, which literally opens a musical spectrum that includes both Italian and international pieces by CSI, CCCP, Franco Battiato, Litfiba, Maroccolo, Celletti and by Tuxedomoon, The Residents, Brian Eno and Hans-Joachim Rodelius, thus reassembling a broad picture of progressive rock. Since its very first years, progressive rock has been associated with visual art – we only need think back to the intriguing connections between Andy Warhol and the Velvet Underground or Michelangelo Antonioni’s incursions into the Pink Floyd. This time, with ‘nulla è andato perso’, the artists involved recreate this alchemy. Maroccolo and Celletti’s collaboration with Masbedo is an authentic creative experiment: visual art is neither an ornament of the concert nor an aesthetic whim of the musicians.