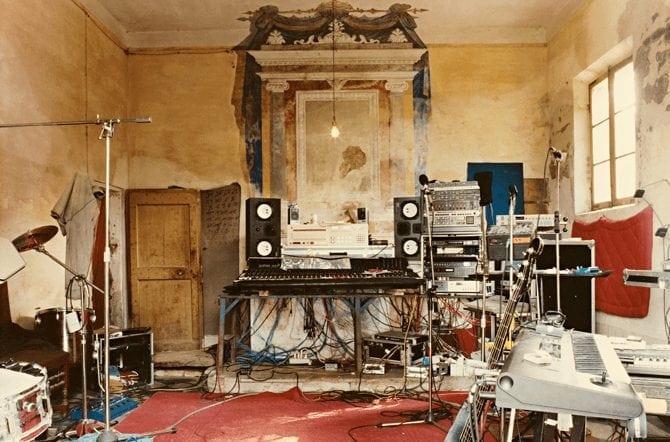 «All the dirt of the 90s and the technology of the 70s» is a quote from the sleeve notes of ‘Epica Etica Etnica Pathos’ (1990), the last album by the Italian group CCCP – Fedeli alla linea. The group disbanded shortly after recording it and immediately formed the new band, CSI – an important transition that marked both the end of an era and the end of the idea of a socialist-oriented political lexicon. ‘Epica Etica Etnica Pathos’ was thus CCCP’s swan song, springing from the rubble and remnants of the Berlin Wall, a collapse that heralded the imminent fall of the Soviet Union and indicated the world’s new political order. But the album was not only the end of an era, but also the end of the 80s, a paean to the tedium of Italian punk, to doped-out, boring Sunday muzak. Just before the fall of communism and the disbanding of this Emilian punk group, Gianni Maroccolo -who had just left Litfiba- Francesco Magnelli, Ringo De Palma and a very young Giorgio Canali joined CCCP. Together, they holed up in the Villa Pirondini, an abandoned eighteenth-century farmhouse in the Reggio Emilia countryside, and recorded ‘Epica Etica Etnica Pathos’, almost entirely as a live recording. The album, a new political polemic tempered by desolate romantic pathos, catapulted the band into a new decade. The musicians rediscovered both popular sounds and standards, in line with a past indelibly marked with an air of nostalgic mystery and the epic. Twenty-five years after its first appearance, ‘Epica Etica Etnica Pathos’ is now being performed live for the very first time by the four original members of CCCP (Gianni Maroccolo, Massimo Zamboni, Francesco Magnelli and Giorgio Canali), backed by the two female vocalists Ginevra Di Marco and Angela Baraldi, and some of the most important musicians and singers of the 80s Italian indie rock music scene, like Lo Stato Sociale, Appino, Brunori Sas, Max Collini (Offlaga Disco Pax) and Francesco Di Bella. Together, they are giving this seminal work back to the public, an album that left its mark on successive generations, and that still represents an entire nation.