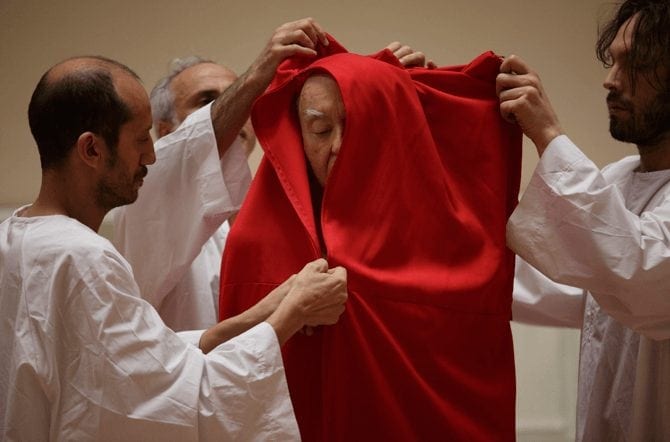 ‘Giulio Cesare (Julius Caesar)’, a show inspired by Shakespeare’s tragedy, is one of the most memorable pieces in the Socìetas Raffaello Sanzio repertoire. Romeo Castellucci brings it back to the theatre in a new version made up of ‘fragments’ that evoke the original, ground-breaking 1997 production. When it first opened, ‘Giulio Cesare – tratto da Shakespeare e dagli storici latini (Julius Caesar – from Shakespeare and Latin historians)’ made a profound impression on the theatrical scene, and established Romeo Castellucci on the international scene. The piece focuses  on the merciless clash between two worlds, the ethereal and the obscure. It also deals with the conflict between fathers and sons, and with the power of rhetoric, seen here as a sign of strength and decadence. Today, it would be almost impossible to restage the original, monumental version of ‘Julius Caesar’, which is why the Cesena-based director, who loves to stage the unstageable, decided to devise a shorter version made up of the most emblematic scenes. The subtitle itself, ‘Pezzi staccati (Loose Pieces)’ evokes the idea of “fragments that say something about the Shakespearian tragedy using dramatic devices.” In fact, the show consists of a series of fragments around which the plot unfolds, or rather, thickens. Castellucci stresses the origin of voice by placing an endoscope inside the throat of the actor, a device that allows the audience to see voice’s inner journey until it arrives at the vocal chords. A central projection enables the throat to be seen – that fragile source from which the voice emerges, where words originate. Words become ambivalent when the person who utters them resorts to powerful rhetoric. Mark Antony’s funeral oration is an essential part of the show and could not be omitted: his display of eloquence becomes a deadly political weapon, a pure stream of mass persuasion. At the same time, it gradually dissolves into soundless words that reflect the fictional basis of theatre. Brutus, Cassius, Cicero, Mark Antony, and Caesar himself, become the instruments of mysterious forces, in a story that crushes the characters, as they are sublimated into history and consigned to eternity.

Production Socìetas Raffaello Sanzio in the frame of ‘and the fox said to the crow. General linguistics course’ Special Project City of Bologna 2014