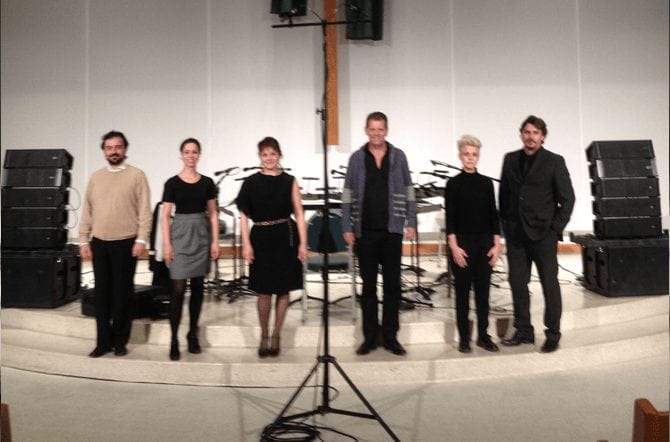 The concert performed by the ensemble Voxnova Italia is an opportunity to encounter the artistic personality of Karlheinz Stockhausen from an unusual perspective, that of his artistic relationship with his second wife, Mary Bauermeister. The concert features a world première of a piece composed by Bauermeister, along with some of Stockhausen’ masterpieces such as ‘Stimmung’.
Karlheinz married Mary in 1967. She was German, too, although she had relocated to New York in the early Sixties. She was first drawn by the Pop Art movement and later became one of the few European representatives of Fluxus, an international network of artists, composers and designers noted for blending different artistic media and disciplines in the 1960s. Bauermeister painted, drew, and wrote; she also composed music and tailored clothes. When she met Stockhausen, they became a couple in life as well as in art. Those years marked a crucial turning point in Stockhausen’s career: the German composer partially distanced himself from radical avant-garde experiments and he broaden his horizons to include Pop culture. In this respect, Stimmung for six vocalists, composed in 1968 after Karlheinz and Mary’s long stay in Mexico, is an exemplary piece. The lyrics teem with highly sensual images, while the overtone singing (singers are asked to sing multiple notes at once) evokes deities and faraway worlds, triumphant alleluias, and transcendental meditations. It is a tonal, and yet also a serial composition. The concert will open with the world premiere of a piece composed by Bauermeister expressly for Voxnova Italia. Voxnova Italia is an ensemble of soloists dedicated to 20th and 21st century music. They “compose” intriguing programs and perform extremely technical and hard to sing pieces in order to please themselves as well as the audience. Their overtone singing in Stockhausen’s ‘Stimmung’ was a hit in the United States.

Produced by
Nicholas Sherwood for VOXNOVA