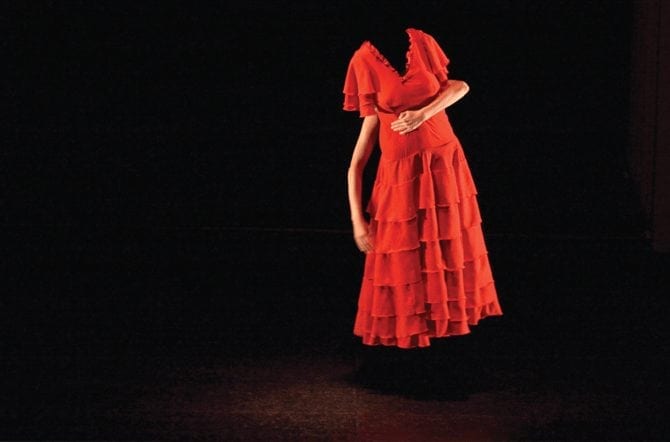 Questcequetudeviens?
A piece by Aurélien Bory for Stéphanie Fuster

The artistic encounter between director and playwright Aurélien Bory, dancer Stéphanie Fuster, cantaor José Sanchez and flamenco guitarist Alberto Garcia is an incandescent one. The outcome is ‘Questcequetudeviens?’ (What do you become?), where life and death, flamenco e illusionism, symbols and rigor, fire, air, and water fuse together and become a theatrical portrait of a woman. After formal dance training in France, in 1996 Stéphanie Fuster went to Andalucía to attend a six months flamenco course: she stayed in Spain eight years. To sum up, she is a French woman who boldly penetrated the typically Iberian symbolic universe of flamenco, and became one of its most renowned dancers. In fact, she has danced with Israel Galván as well as with the most important and famous flamenco dance companies. Aurélien Bory had met Stéphanie Fuster before she went to Spain. When he met her again, he decided to dedicate to her a quite ambitious show entitled ‘Questcequetudeviens?’. In order to bring the adventure of a woman on stage, Bory uses a guitarist, a flamenco cantaor, and a simple, though magical set illuminated by a captivating light design. Thus, he gives life to the peculiar stage illusionism that he has always evoked in his shows. In the space of one hour, the show tells Stéphanie Fuster’s adventure running through a universe of symbols that portray the pivotal moments of her life: the adolescent dream of becoming a dancer, the confrontation with a different culture, the rigor of the training. It is a journey that starts from a red fire and finally gets to air and to the confrontation between choreographic movement and water. Obviously, the final question “What do you become?” does not concern the dancer exclusively, but also the audience.