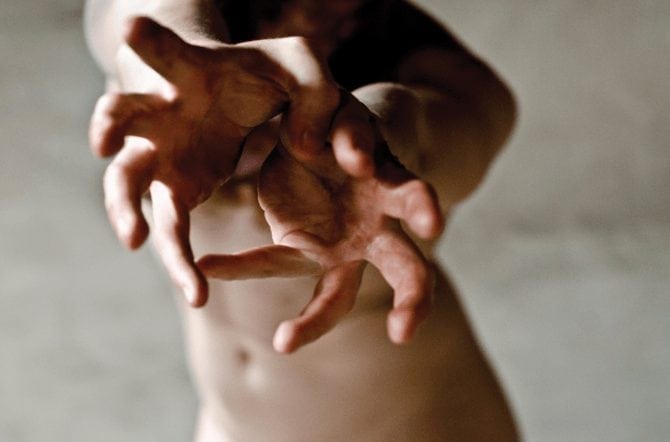 Aoife McAtamney is young Irish dancer and choreographer with magnetic eyes. Romaeuropa Festival is proud to host the Italian premiere of her first solo ‘Softer Swells’, which was an Aerowaves selection for 2014. ‘Softer Swells’ is a bold combination of sound and movement, feminine delicacy and male vigor. McAtamney comes on stage alone, and immediately sings a Celtic song with her beautiful voice, thus giving life to an atmosphere of mild abandonment that gradually gives way to an original dance that makes an impact on the audience without resorting to any special effects. The performer oscillates between air and earth, that is between the delicate, feminine vocal sublimation and the athletic, twisted male movement. Aoife McAtamney began working with her voice in 2012; since then, she has used it as a creative tool to warm up her body and deepen her choreographic research. Also in 2012, she learnt the traditional Irish song ‘Ye Rambling Boys of Pleasure’. In ‘Softer Swells’, she performs an original version of the song, by adding melodic variations based on improvisation, as well as words of rapper LL Cool J’s song ‘Doing it’ in the lyrics. Aoife McAtamney is a dancer endowed with a strong personality. She has worked with -amongst others- William Forsythe, Wayne McGregor, Angelin Preljocaj. She splits her life and work between Dublin and Berlin, where she carries out her personal as well as her collective artistic research with long term collaborators and friends of DISH Dance, a group she formed in 2012 and that she has been co-directing since then. In 2014 she was selected as Carte Blanche Artist for the European project Modul-Dance.