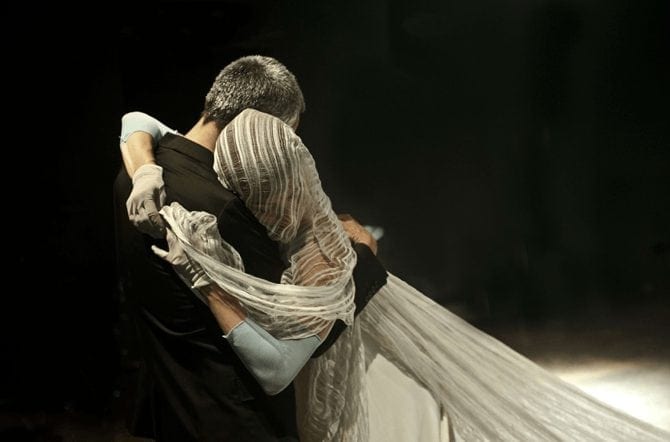 Emma Dante interviewing a Cyclops? No way! And yet, it happens in ‘Io, Nessuno e Polifemo (I, Nobody and Polyphemus)’, a new show by Emma Dante, in which the Sicilian artist will be director, playwright, costume designer, and actress. She will be on stage with the actors of her company, a group molded by years of close collaboration. The idea of the show occasioned with the book ‘Corpo a corpo’, a series of impossible interviews assigned to different authors: Emma, who was born in Palermo but grew up in Catania, chose Polyphemus, a defeated figure. Thus, she confronted the Hellenistic spirit that pervaded Magna Graecia in antiquity, that is one of the most important cultural references of her homeland, Sicily. In this play, the adventures told by Homer that are at the root of Western culture stay in the background. Obviously, it is neither the bright gods nor the mortal heroes that arouse Emma’s curiosity: in fact, «with time and solitude, Polyphemus turned into stone». The impossible interview is a stylistic exercise that belongs to the realm of literature: in order to take it on stage, it is necessary to reinvent it both visually and physically, as Emma Dante usually does. Not to mention the central role of the music, composed and performed live by Serena Ganci, which gives a surreal and pop touch to the show. Polyphemus has been living in a cave for years, he is an outcast, a remnant of epic poetry, and he obviously aroused Emma’s curiosity: outcasts, outsiders and dropouts have always been the incandescent core of her poetics. Her ironic and talkative Polyphemus, a somehow funny character, is even willing to reveal the refined recipe of «crapetto caso e ova» (goatling with cheese and eggs). He becomes the archetype of all those who have been defeated by life. It is difficult to penetrate his secret, even though an instant of theatre could reveal it.