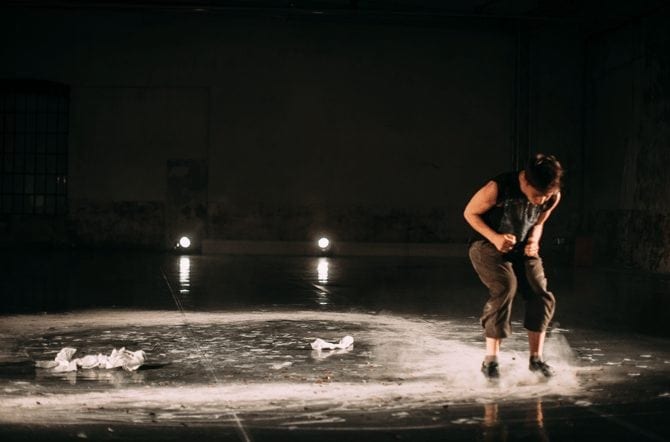 Chiara Frigo is a charismatic and experienced Italian choreographer who has presented her powerful work in the last two editions of DNA. In 2013 we saw ‘When We Were Old’ -an artistic partnership with Canadian choreographer Emmanuel Jouthe- and in 2014 she returned with ‘Ballroom’, an educational project for teenagers from Lazio in central Italy. This year, she comes back to DNAeurope with ‘West End’ a clear reference to the area of London that teems with commercial theatres. This is the first dance solo that Frigo has choreographed for a dancer other than herself, and it comprises a series of scenes that portray the decline of the West. ‘West End’ thus concludes a cycle of artistic research on the theme of entertainment that began with the European project ‘Act Your Age’. The combination of dance and sound typical of tap dance, coupled with powerful texts and knowing references, give life to a rhythmical performance that explores the undeniable relationship between the West and decadence. Depending on the context, the use of tap dance in the show can be light-hearted or dramatic, celebrating both death and rebirth. The extraordinary dancing of Amy Bell conveys the dual dimension of a West End which is both a place of entertainment and the end of the line for the West. Writer Riccardo de Torrebruna is responsible for the poetic structure of the piece. Chiara Frigo graduated in molecular biology and in 2006 her first creation, ‘Corpo in DoppiaElica’, was awarded third prize at the 10th Festival of Choreographic Miniatures in Belgrade. Shortly afterwards, she embarked on an astonishing artistic journey that has taken her all over the world and has earned her many awards.