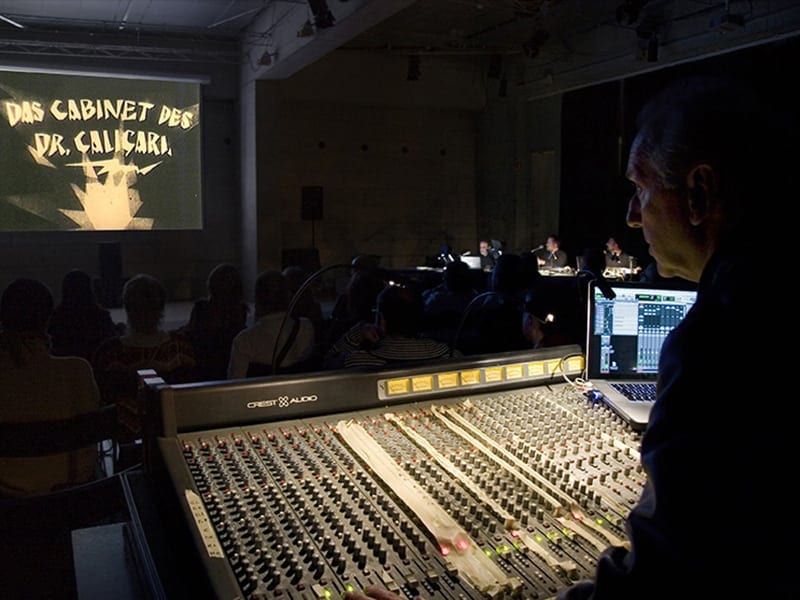 After presenting their personal soundtrack to Hitchcock’s Blackmail at the Romaeuropa Festival 2016, shaking up all the clichés of film music with their live performance, Edison Studio (the group formed in 1993 by Mauro Cardi, Luigi Ceccarelli, Fabio Cifarelli Ciardi and Alessandro Cipriani) is back to working on the great masterpieces of the silent era.

The protagonist of a new multimedia experience between music and images is, Das Cabinet des Doctor Caligari, a masterpiece of German expressionist cinema (and apotheosis of the expressionist movement as a whole) directed by Robert Wiene in 1920. With its hallucinatory scenes, created by Hermann Warm, with its angular geometries, its shadows and its dead ends, this cinematic masterpiece recently restored by the Cineteca di Bologna continues to mesmerise the audience.

Edison Studio analyses the film by detecting expressive climates, formal developments, sounds made using keyboards, samplers, percussion instruments and resonant objects, creating a new real-time action that catapults into the soul of the film: a distorted world that, between sleepwalking and madness, has surprisingly anticipated future artistic experiments and important social themes.

This website is saving the energy of your screen as it is not being used. It's part of a global effort to lower the planet's electrical consumption and CO2 emission level. Resume browsing
Resume browsing