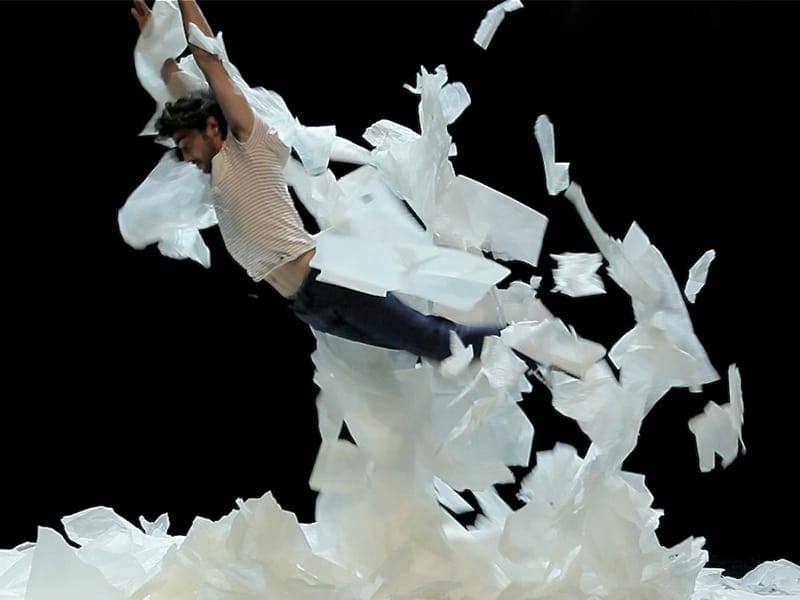 Autobiographical Circus: this is how acrobat Matias Pilet and documentary reporter Olivier Meyrou define Tu, a show that marks their renewed collaboration following the success of Acrobates, presented in 2014 at Romaeuropa Festival.

It was during the tour of this last work, devoted to the memory of their trapeze artist friend Alexandre Fernier that Pilet noticed the strong influence that the past continued to have on his life. Before his birth, the French artist lost his twin sister, who died in the womb a few days before childbirth. On stage, covered by clouds of white paper, Pilet sets off on a journey back in time, into the most intimate and hidden parts of the body, composing a solo in which reality and fiction play a game of tag.

Every scenic movement is nourished by the images filmed by Olivier Meyrou (also director), who followed Pilet in a long journey through Chile. Voices and visual fragments of Pilet’s mother, of distant yet near landscapes, of roots that have been cut and may never be recovered, prepare us for a genuine leap into the dark: a shiver, a sudden shock of life, an intensely private and personal look that now becomes universal.

12.10 + meet up with Olivier Meyrou and Matias Pilet at Accademia di Francia - Villa Medici
You may be interested