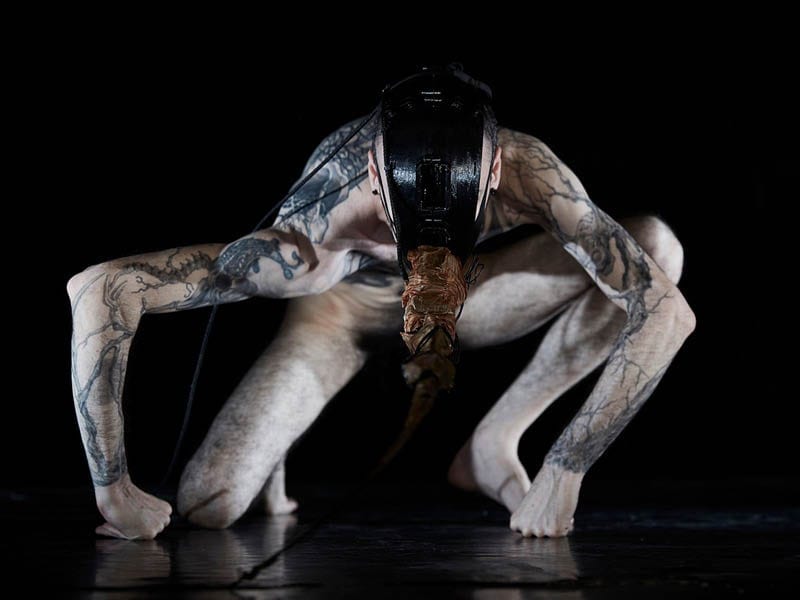 «What does it mean to create a truly autonomous machine, independent from human control? And what happens when such a machine becomes part of a human body? Could this help us understand that the power of the human body lies in its ability to be different and to take on unexpected forms and identities?».

Starting from these questions, Berlin-based Italian artists Marco Donnarumma – performer, sound artist and scholar, honoured by some of the most important festivals in the world, including the famous Ars Electronica in 2017 – and Margherita Pevere – internationally renown visual artist, bio-artist and researcher – construct Eingeweide. Within the performance space, the performers’ bodies confront a robotic prosthesis named Amygdala. The prosthesis is guided by artificial intelligence algorithms that allow it to learn in real time, through trial and error, how to move and exist on stage.

The sounds of the performers’ musical movements are re-synthesised and transformed into a powerful and visceral auditory experience, capable of literally submerging the spectator. Human and machine struggle to access a new form of hybrid identity, and mutually influence each other creating a connection of body and psyche able to redefine the concept of intimacy, as well as our imagination of the body and its relationship with new technologies.