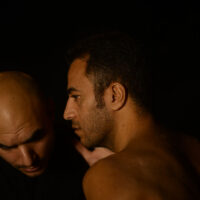 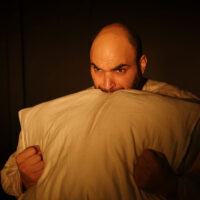 Director Filippo Andreatta returns to represent the relationship between humans and nature through the theatrical medium, this time inspired by the alpine tragedy of Stava, an Italian town which, on July 19, 1985, was hit by an avalanche that wiped out its existence. The void left by the news reports corresponds to that of a scene inhabited only by ghosts: those of a lost landscape and that of a choir intoning Lux Aeterna by Ligeti, giving voice to the emotion of the inhabitants who once lived there. A requiem that “plunges western theater into its birth: the Attic Tragedy”, as Andreatta explains.

ENSEMBLE VOCALE CONTINUUM – The Ensemble was founded by Luigi Azzolini with the aim of studying and enhancing new and modern choral compositions, and the rediscovery of lesser known classic pages. In the summer of 2006 the Ensemble performed the world premiere of Vijidaes (Giorgio Battistelli). Among other revivals particularly remarkable are the execution of Verdi’s Requiem; the inauguration of the Sacred Music Festival with Il Trionfo del tempo e della verità by Handel; Händel’s Messiah with the Haydn Orchestra of Trento and Bolzano; the execution of the Messiah, of the Messa di Gloria (Puccini) and of Adelia (Donizetti) at the Alto Adige Festival in Dobbiaco. Present several times within the Symphonic Season of the Haydn Orchestra, the Ensemble presented the resumption of the Canti Rocciosi (by Giovanni Sollima). For the Transart Festival  last September, Ensemble Vocale Continuum proposed and recorded Silvia Colasanti’s Requiem. Its recordings, many of which have premiered in a live setting, are numerous.

György Sándor Ligeti – Born on 28.05.1923 in Transylvania, he died on 12.06.2006 in Vienna. He was a pivotal composer of avant-garde music, especially on the development of tonal color and mass movement of sound. Most of Ligeti’s music after the end of the 1950s involves radically new approaches to music composition. Intervals, rhythms and musical harmonies are often indistinguishable, yet act together in a multiplicity of sonar events creating a sound that can communicate serenity as well as dynamic and distressing movement. Examples of these effects can be found in Atmosphères (1961) for orchestra; Requiem (1963-65) for soprano, mezzo-soprano, two choirs and orchestra; and Lux Aeterna (1966) for choir. Ligeti has received numerous awards, including the Großer Österreichischer Staatspreis (1990), the Praemium Imperiale award for music from the Japan Art Association (1991) and the Theodor W. Adorno Prize from the city of Frankfurt for outstanding musical achievements (2003).