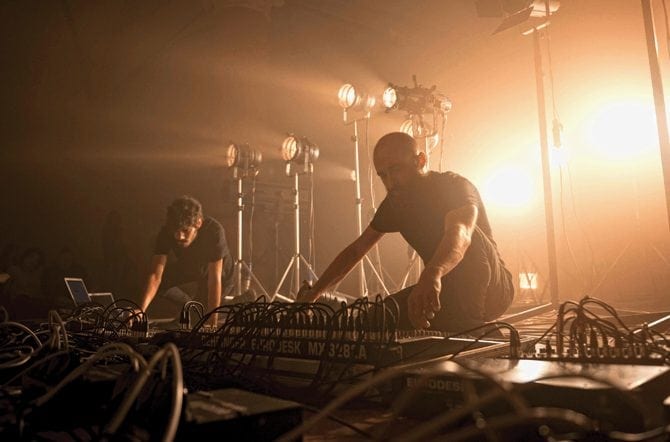 It is difficult to imagine how one could play light, but let us try.  Let us think about a symphonic orchestra: the strings, the woodwind and the brass section, the percussions and so on – every instrument turns into a lamp. The result is ‘The Enlightenment’, the first concert/performance of symphonic light by Quiet Ensemble. To get an idea of how the show works, the strings will be connected to neon lights of different lengths, shorter for the first and second violins, longer and longer for the violas, the cellos and the double basses. Bulbs, halogen lamps, spotlights will be connected to the winds, strobe lights to the percussions. Through an electronic circuit sensitive to the flux of electric current, each light will produce a sound that will be amplified and transformed in real time by the two members of Quiet Ensemble, Fabio Di Salvo and Bernardo Vercelli, the directors of this peculiar orchestra. Vercelli and Di Salvo, who founded their duo in 2009, are familiar with such bold experiments. In their previous performances, they directed a chamber orchestra for mice, a musical for snails, and they also got bananas and other fruit to sing. From classical antiquity to Baroque, many thinkers shared Plato’s philosophical concept, according to which the movement of the celestial bodies produced the so-called “musica universalis”, or “music of the spheres”. The German astronomer Johannes Kepler even tried to transcribe this imaginary music while he was studying the orbits of the planets. Today, with their luminous symphony ‘The Enlightenment’, Quiet Ensemble dramatize the subtle and indissoluble bond between light and sound.