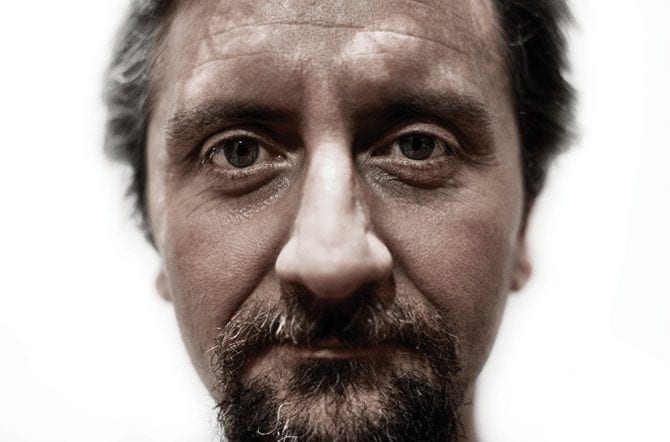 Ascanio Celestini is a virtuous, irreverent artist, an authentic all-round entertainer. This year, he makes his debut at Romaeuropa Festival with ‘Laika’, a new show in which he deals with a thorny theme, to say the least: how would Jesus be, what would he do and think if he came back to Earth? Through his penetrating critical gaze, Celestini leads us to the outskirts of a city, to a one-room flat with a view onto the parking area of a supermarket. There we find Jesus, who this time has not been sent to Earth to save or redeem humankind, but rather to observe it. Strange as it may seem, this is precisely the reason why he is blind. It is Peter, one of the apostles, who tells him what goes on in that paved parking lot which he observes through the window. The apartment is completely bare. This bareness symbolizes the blindness of those who can observe the world only through somebody else’s eyes. The audience will listen only to Peter’s voice, as if it were Jesus’ subjectivity. The lack of eyesight thus becomes the ideal condition through which to acquire the truest sight, as in ‘Oedipus Rex’. Jesus will not let anyone in that apartment, maybe because he wants to abandon himself to his own thoughts and remarks about miracles, the sad destiny of Judas, suicide. Most of all, he thinks about the poor homeless tramp he sees through Peter’s eyes, an illegal immigrant who came by migrant boat and now sleeps on a bed of flattened cardboard cartons in the parking area in front of the window. Celestini’s performance is accompanied by Gianluca Casadei on the piano accordion, a musician who is able to evoke refined folk atmospheres. With his theatrical energy, Celestini tells about the collapse of ideologies and how it has eroded religions, too, which he observes through the sightless eyes of a poor, wretched Christ.