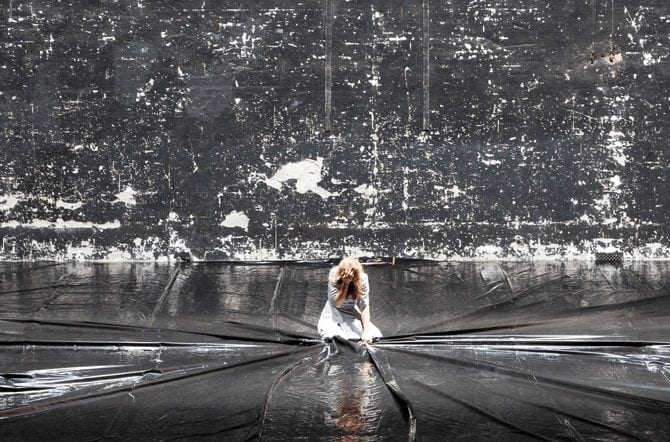 The intimism of Franz Schubert’s Lieder joins with Romeo Castellucci’s theatrical power in ‘Schwanengesang (Swan Song)’, an evening of songs that is an extraordinary metaphor for life, the individual, and the theatre itself. Since the Eighties, Castellucci and his company, the Socìetas Raffaello Sanzio, have developed theatre of images and visions, where words and whole texts become mere containers of sound. In recent years, Castellucci has used music as a theatrical device, as his collaboration with composer Scott Gibbons, as well as his staging of Claudio Monteverdi, Richard Wagner, Igor Stravinsky’s scores testify. The music of Arnold Schönberg plays a central role in ‘Moses und Aron’, a new piece by the Socìetas Raffaello Sanzio that opens the next season of the Paris Opera. Castellucci’s fascination with Schubert originated with his staging of ‘Il velo nero del pastore (The Minister’s Black Veil)’ and has developed with ‘Schwanengesang’, a piece that takes its name from one of the Lieder rather than the whole cycle. The ten Lieder that Castellucci has chosen for this new show were composed at various times in Schubert’s life, even though they all express that distinctive style, characterized by solitude, parting and loss. The intimate and minimalist performance of Swedish soprano Kerstin Avemo is accompanied on piano by Alain Franco. Valérie Drèville, former associate artist of the Festival d’Avignon, plays a central role in the piece: accompanied by Gibbons’ music, she upturns Schubert’s intimism, thus showing the hidden face of the Lieder, the dark side to the perfect geometry of these songs. In doing so, she shines a spotlight on the dramatic duality of Schubert’s life, on life itself, the theatre, and the artists who make contact with an audience.