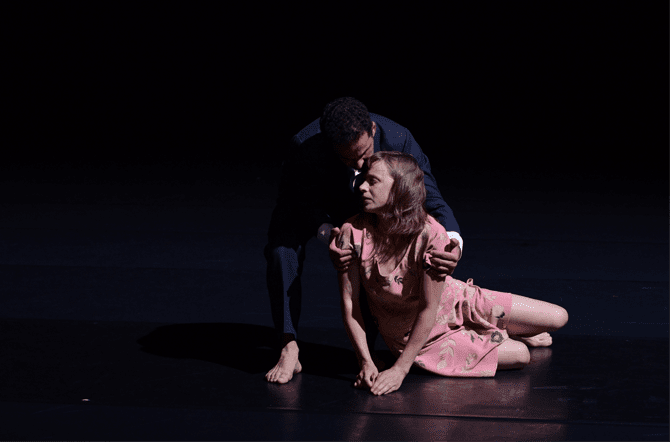 «Shamelessly romantic» is how Anne Teresa De Keersmaeker defines ‘Verklärte Nacht’, a choreography based on the homonymous string sextet by Arnold Schönberg. It is a poetic love story that is transposed into a dance duet, or rather almost a trio.
The Belgian choreographer had already brought Schönberg’s score on stage before. In 1996 she choreographed a luxurious dance for fourteen dancers; in this new version, she completely reinvented the piece. De Keersmaeker was struck by the music composed towards the end of the Nineteenth Century by a young and still unknown Schönberg. His vaporous, late romantic, vaguely impressionistic style, was radically different from that of his latter work, when he became the  austere prophet of all the avant-gardes of the Twentieth Century. Schönberg’s ‘Verklärte Nacht’ was inspired by the symbolist poem of the same name written by German writer Richard Dehmel. The poem, whose verses are faithfully mirrored in Schönberg’s music, tells the story of two lovers who are walking through a dark forest on a moonlit night. The woman shares a secret with the man: she bears the child of another man, but she also feels «a longing for life’s fullness». The man reassures the woman by telling her that their love will transfigure the child, who will become their child. De Keersmaeker’s new staging of ‘Verklärte Nacht’ is essential and terse. The stage is bare, the light design is plain and minimalist. There are only two dancers on the stage, preceded by the brief appearance of a third man who personifies the story of a love triangle. «It’s all about striking a delicate balance between formal, or rather, structural and more concrete, expressive qualities», De Keersmaeker stated «and I am certainly not afraid of telling a story. I consider ‘Verklärte Nacht’ as one of the stages in my personal research into duet writing».