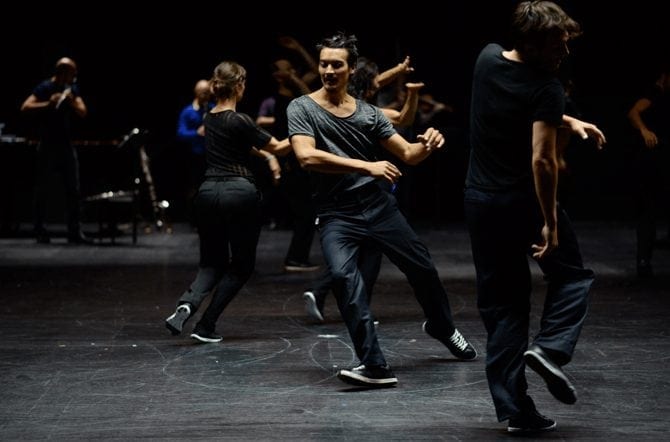 Romaeuropa has invited back to Rome Anne Teresa De Keersmaeker, the founder of Rosas dance company, and one of the most charismatic and authoritative choreographers of the contemporary scene. ‘Vortex Temporum’, her recent choreography with music by Gerard Grisey, is one of the most refined and spectacular blends of dance and music. Before starting her dance training, the Belgian choreographer studied music for a long time; her background deeply influenced her subsequent work and became a distinctive feature of her style. De Keersmaeker loves contemporary as well as Twentieth Century scores. Only she could deal with a piece as ‘Vortex Temporum’, one of the best works of the French composer Gérard Grisey. It is a work characterized by a peculiar temporal dimension: time expands and contracts as the music goes by, thus creating a vortex. And the vortex of time, as De Keersmaeker explains «is a balancing act between memory and anticipation, leaning back and forth between the ghost image of the past and a desire towards the future». De Keersmaeker is extremely skillful at choreographing dances that tell a story as well as purely abstract ones, as she did in this case. She is among the few choreographers who know how to enhance the relationship between sound and movement, a relationship that in ‘Vortex Temporum’ is expressed by the physical and symbolic connection between every individual dancer and the six musicians who play the score. It is worth noting that the musicians involved in this project are the members of Ictus, the ensemble directed by Georges-Elie Octors, which is presently considered among the best ones on the contemporary music scene. Grisey’s music is characterized by a quest for the molecules (or tiniest parts) of sound, but it is also animated by a many-sided polyphony, on which De Keersmaeker displays a wonderful counterpointed dance. The six dancers actually harmonize with the music, even though the choreography maintains its own logic and its autonomy.