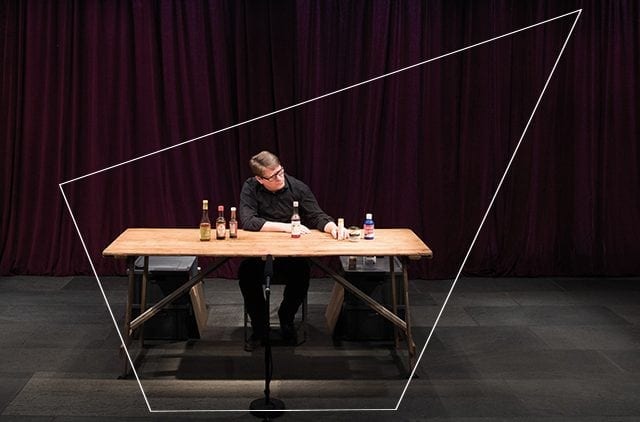 Programme
Duration 40 ‘ / 60 ‘ for each show | English only performance

For the 400th anniversary of Shakespeare’s death, Romaeuropa Festival presents one of the most original and radical works by Forced Entertainment: Complete Works: Table Top Shakespeare. More than just a “tour de force” through all of Shakespeare’s plays during a single week, the show is a genuine dramatic device that will see actors from the company reduce 36 plays into 40-60 minute performances, acted out on top of a 1 sqm table using normal everyday objects. A salt and pepper pot for the king and queen. A ruler for the prince. A spoon for the servant. A water bottle for the messenger…

Founded in 1984 in Sheffield, UK, and led by the charismatic Tim Etchells, Forced Entertainment captured international attention for its constant experimentation with forms and languages in a constant dialogue between the comic and the dramatic. The group has six stable members, in addition to numerous collaborators studying what theatre and performance mean for our contemporary society and the relationship between the stage and the audience.

Complete Works creates a dimension of intimacy and closeness to the spectator, exploring the strength of the narration and the power of Shakespearean language expressed by the silence of apparently inanimate objects. The wooden table becomes the arena of the audience’s imagination and the centre of their feelings. In the words of Tim Etchells,  “If the comedies aren’t incredibly funny, it’s not really our problem – it’s more of Shakespeare’s problem”.

19:00 Much Ado About Nothing
Played by Richard Lowdon
20:00 Henry IV – Part 1
Played by Jerry Killick
21:00 Antony and Cleopatra
Played by Cathy Naden

The FORCED pass allows you to live the Forced Entertainment’s Shakespearean experience as you like it the most. Take a look below:

For more information contact our Box office via promozione@romaeuropa.net and +39 06 45553050