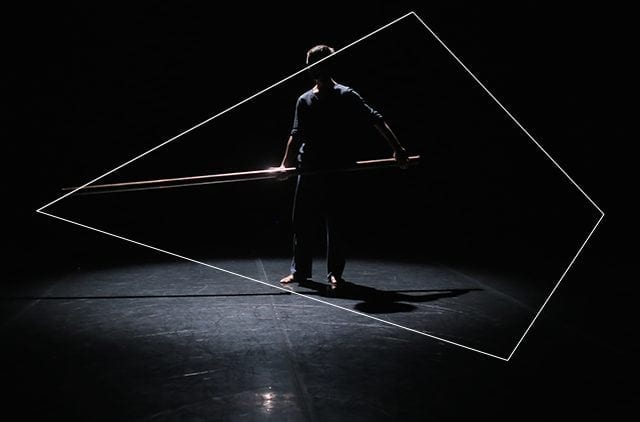 Winner of the DNAppunti coreografici prize, Lara Russo is presenting her completed RA-ME Cercarecoraggio/ProteggereInnocenza, which she had originally presented in a 15 minute study in 2015. The fulcrum of her choreography is the material evoked in the title: copper, a resistant material, cold to the touch, apparently lifeless, introduced to the stage as a soft, malleable body capable of causing movement and dancing on its own.

Three male performers each work with a sheet of copper and dialogue with its properties in a choreography that unites improvisation with pre-established blocks of movement. The sheets fall, are suspended and assembled, as their constant changing causes the space around them, the bodies of the dancers and the feeling of the whole pièce change with them.

Originally from Milan, Russo’s work has developed along the lines of dance, photography and video in a career that has taken her from Barcelona to Berlin and lastly to Bologna, where she currently lives and works. After training for both theatre and dance, “butoh” and “contact improvisation”, she worked as director’s assistant for Virgilio Sieni during the 2013 Venice Biennial, obtaining wide recognition from some of the leading national institutions for her choreography.

RA-ME is another step on her path of creating site-specific works and interacting with plastic arts and live music. In her own words: “The presence of the material forces the dancers into a state of alertness and true, instant collaboration. […] This changes the concept of choreography: I don’t decide, as “choreographer”, or set the scene – it’s what happens and what follows the revelation that prevails”.

With the collaboration of Yesenia Trobbiani