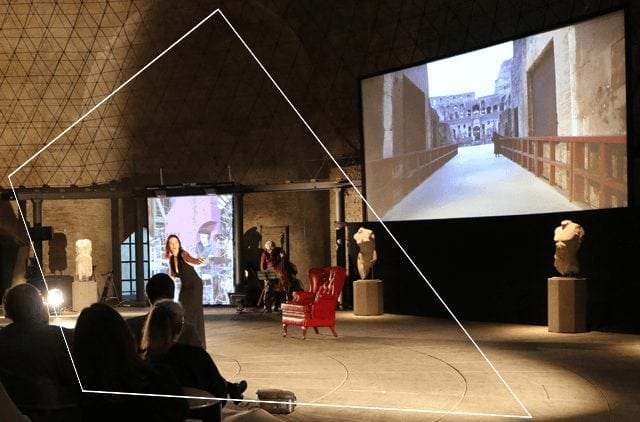 Giorgio BarberioCorsetti has always experimented with new technology applied to on-stage representation, and this year he is back at the Romaeuropa Festival to portray a Europe suspended between a glorious history and today’s economic, cultural and social transformations.

If his show, Il ratto di Europa, succeeds in acting like a time machine, it is thanks to the GARR network, the national ultra-broadband network dedicated to universities and research sponsored by the Minsitry of Education, Universities and Research (MIUR), which connects hundreds of science and culture hubs at the speed of light. This fibre optics network, which relies on the most advanced technological instruments, will be used by BarberioCorsetti to virtually connect exceptional sites in an experiment that will allow him to fragment the space on stage and unite distant locations in a single, digitally augmented representation. The audience will be hosted in the AulaOttagonale at the Baths of Diocletian and at Palazzo Altemps, which will interact through two large video screens. This is where Europe lives, interpreted by MaddalenaCrippa, responsible for sorting the direct and delayed connections with the Colosseum, CryptaBalbi and the INFN laboratories in Frascati, all places which will be inhabited by symbolic figures.

As the director explains, time: “Inhabits the ring of DA?NE (Double Annular ? Factory for Nice Experiments), the particle accelerator, and the vortex of material in movement connects the most advanced research with the origins of the universe, using scientific and mythical language together in the sequence of eras created and destroyed”.

Texts by Seneca, Bhagavadg?t? and Alex Barchiesi will be used along with his own to narrate our present day scenario of migration, banks, market collapse, art in the time of ISIS, and the Ego in the time of the internet. When the possibility of being “everywhere all the time” and the schizophrenic use of masses of information cancel the world and its history in an eternal present.