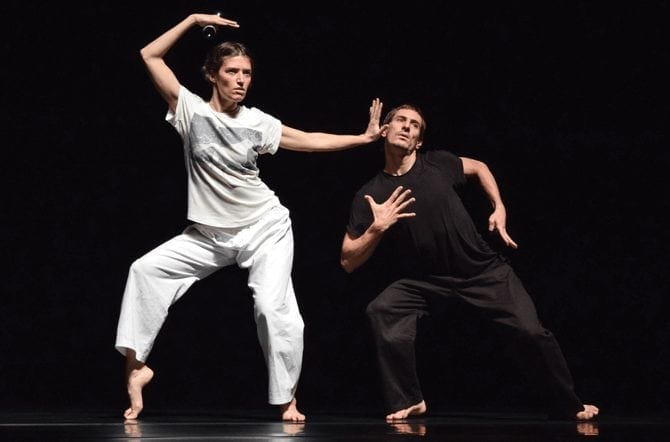 h 8pm warming up! in the foyer with Ioannis Mandafounis and Elena Giannotti


Ioannis Mandafounis and Elena Giannotti are two brilliant, lively, multi-talented performers; together, they form an immensely expressive duo. In ‘ApersonA’ they make a resolution to bring an abstract concept on stage, even though their dance paradoxically and ironically disavows conceptualism itself. ‘ApersonA’ is a choreography that resembles a tableau mouvant. The capital A that opens and ends the title is also the name of the protagonist of the piece. Mandafounis and Giannotti’s basic idea is to give life to a comic opera with a libretto made of organic sounds, gestures and spaces. The bodies of the two dancers, the emotion evoked by their presence on stage, the movements that follow one another, give life to a series of characters and roles that, in turn, set an unintentional récit in motion. In ‘ApersonA’, Mandafounis and Giannotti revisit the codes of the musical comedy through a refined game, where singing becomes a dancing body and movements become a score. In this artistic project, the body does not follow the dictates of rhythm and melody, but rather recreates their evocative and emotional power. The overlapping of stereotypes is humorous, dramatic, and sarcastic and it throws the audience into confusion. The work is built on the relationship between two Persons, whose ambiguous involvement is a bond for an emotional journey.