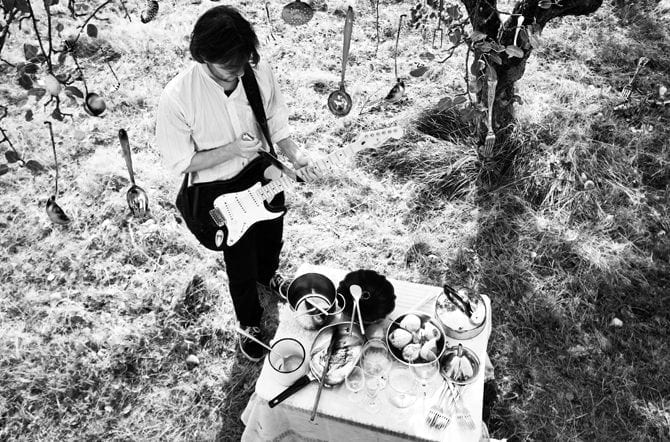 Simple objects and the sounds they make have aroused the curiosity of musicians and composers of all times. In ‘Musica da Cucina’ (Kitchen Music), Fabio Bonelli has created a score for kettles, dishes, pots and pans that are played alongside more traditional musical instruments. Together, they give life to an intimate, even rarefied atmosphere. Fabio Bonelli -aka People From The Mountains- is a versatile, creative artist as well as a talented electric guitarist. His distinctive style is a combination of the everyday and the enchanted, of the simplest and most ordinary objects and the magic of sound. We need only recall his previous works: ‘destroyBeethoven’, a nostalgic and painful elegy to the Golden Age of vinyl in classical music and the Muppet-style performances of ‘Sit In Music’. The idea behind ‘Musica da Cucina’, an artful play on the term ‘musica da camera’ (chamber music), is to capture the sounds of the kitchen in order to create a background of noise for the intimate melodies of the guitar, the clarinet and the accordion. The result is a series of cleverly constructed pieces where traditional instruments take up a gentle dialogue with kitchen objects. Bonelli’s music is expressive, ethereal and hypnotic; it comprises familiar and evocative sounds such as the flowing of water, a kettle whistling, the scraping of cutlery on dishes and the tinkling of glasses. The concert also encourages intimate, direct communication between artist and audience: spectators are often invited to take part in the performance and called upon to play pots, pans and kitchen instruments as if it was the absolute norm.