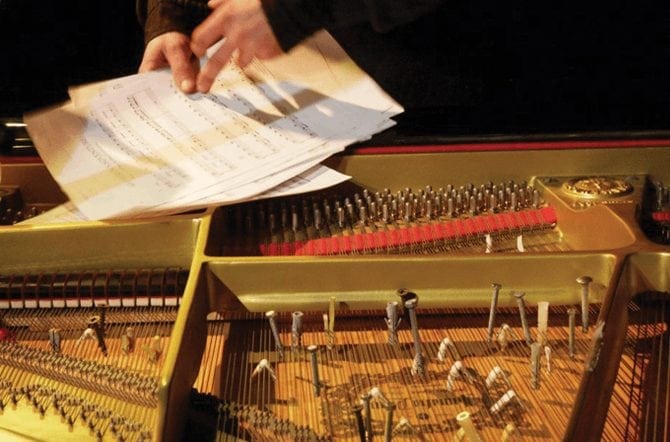 
‘Sonatas and interludes’, the charming and enigmatic collection of twenty pieces for prepared piano by John Cage, is a legendary work. Fabrizio Ottaviucci returns to Romaeuropa Festival to play Cage’s seminal Twentieth Century piece. The suffused charm of ‘Sonatas and Interludes’, composed by Cage between 1946 and 1948, is due to different elements, most of all to the illusionistic sound of the prepared piano, invented in 1938 by Cage himself, who placed pieces of metal and wood between the strings, so that the piano, the noblest of keyboard instruments, could let out unusual sounds. In the following years, Cage continued to explore these sounds and he finally achieved an unusual and unequaled result with ‘Sonatas and interludes’. When he started to work on these pieces, the American composer had already been introduced to Eastern philosophy and music. He had broadened his creative horizons and he gave life to a music that sounded very uncommon to his contemporaries’ ear. Both the audience and the critics were struck by dreamlike, keen, symbolic atmospheres that they did not immediately understand. However, from the Seventies on, ‘Sonatas and Interludes’ has gradually become a classic, as numerous live performances and dozens of recordings testify. A highly regarded performer of contemporary music, Ottaviucci has collaborated with musicians such as Markus Stockhausen and Stefano Scodanibbio. He has often performed music by Terry Riley and by Giacinto Scelsi, whose Suite for piano he performed last year at Romaeuropa Festival. With Sonatas and Interludes, he deals with one of the most challenging piano scores of all times, based on pure atmospheres of lyrical precision rather than on force.