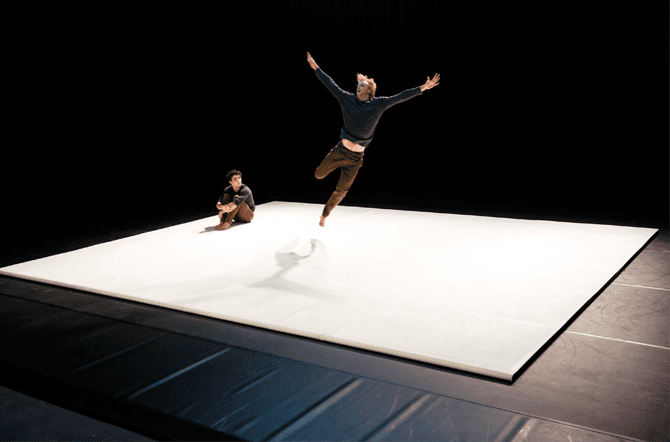 ‘Nos limites’ (Our Limits) is an elegy of life and memory, a show that brings together the energy of contemporary circus and dance, and an artistic crossroads where the paths of Rahdouane El Meddeb, Matias Pilet and Alexandre Fournier intersect.
Fabrice Champion, a trapeze artist and circus performer of international renown, had an exuberant and peculiar personality. He knew how to face and overcome his own limitations; he experienced and boldly embodied the “poetry of the limit”, when in 2004 he had an accident and became quadriplegic. Since then, Champion continued to work as a teacher of acrobatics and aerobatics. He became friends with Fournier and Pilet, two of his most promising students. In 2011, while they were working together on a new show entitled ‘Nos limites’, Champion died during a shamanistic ceremony in Peru. Then, Tunisian choreographer El Meddeb (associated artist at Centquatre – Paris, and twice at Romaeuropa Festival with two of his shows) joined in to help them complete their work. El Meddeb infused the show with his great vitality and talent; he managed to bring together dance and the tumultuous energy of the circus, as well as the memory of a beloved master and the emotions aroused by his death. The encounter between two circus performers and a choreographer thus became the creative spark to complete ‘Nos Limites’ and to bring it on stage. As ‘Acrobates’, the show that marked the debut of Pillet and Fournier at Romaeuropa Festival in 2014, ‘Nos Limites’ is a homage to Champion as well as a reflection upon life.