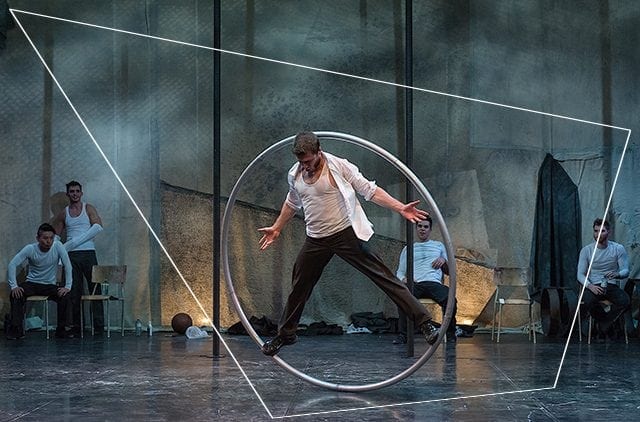 Not many artists are capable of combining commitment and lightness, transversality in languages and popular culture, political involvement and entertainment without losing a clear, original and fascinating aesthetic concept. Le 7 doigts is without doubt one of them. The Quebec company that is rewriting the destiny of new circus on the international scene is back at the Romaeuropa Festival following the success of Cuisine & Confessions.

Performed more than 1700 times in 25 countries and 200 cities worldwide, and winner of numerous international awards, Traces is a new, adrenaline-filled journey through dance and acrobacy. This year the protagonists will be performing against a setting of an outdoor temporary refuge where a catastrophe is about to happen. At the beginning of the show, Les 7 doigts announce that “there are emergency exits all over the place, because something terrible could happen”, making it immediately clear that their Traces is a visionary escape route from the anxiety and tension of our times. An attempt to be elsewhere.

In fact, the only way to react to a catastrophe is to accept the risk, live life to the full even when hope seems lost. Weaving dance and circus into their own personal experiences, the young protagonists challenge gravity in explosive acrobatics that include elements of urban culture such as skateboarding and baseball. They fly through the air in a battle to save themselves and the world, while managing to support each other poetically. And if they fall every now and again, you just have to interpret it ironically. Because for Les 7 doigts: “Creation is the only antidote to destruction”.